There seems to a prevailing opinion among International Relations’ scholars that our world is one of perpetual crises. The moment one crisis ends, such as the threat of Ebola, another begins, such as Russian military involvement in Syria. Communication has always been an integral part of crisis management. Moreover, diplomatic crises are often defined as a breakdown in communication between states.

During diplomatic crises, nations make frequent use of the media. At times, this is in order to pass indirect messages to other nations. At other times, this is an attempt to control the narrative of the crisis in the local and global press. Controlling the narrative of a crisis may be achieved through the utilization of networks. Such activities are in line with a networked model of diplomacy, as opposed to the club model  (for more on this see Jorge Hiene’s paper). Networks may be made up of diplomatic institutions, NGOs, private corporations, grassroots movements and even individuals.

Currently, both Israel and Palestine are offering their narrative of the events unfolding in Jerusalem and the West Bank. As part of its management of the current crisis, the Israeli MFA has taken to social media. And it is not alone. The ministry is but one part of a multitude of intersecting nodes of networks now partaking in the Israeli public diplomacy offensive. It is the interplay between these networks that demonstrated the application of networked diplomacy to crisis management.

The Foreign Ministry is an integral part of the social network of governmental institutions that are currently active online. This network includes a plethora of ministries such as the Prime Minister’s Office and the Israeli Defense Forces  As I wrote last week, Israel’s narrative rests on the claim that recent terror attacks are the direct result of Palestinian incitement against Israel. While this narrative is promoted by the Israeli MFA, it is also heavily promoted on the PM’s and IDF’s channels as can be seen below.

PM Netanyahu:  To stop the murders, it is necessary to stop the incitement.https://t.co/cJJYKG94OA pic.twitter.com/OJ3vz7hLen

I think it’s time that the intl community told President Abbas to stop the incitement and hold him accountable for his words and his deeds.

Been off line for the last hour. Attacks against #Israelis today – 2 in Jerusalem & 2 Ra'anana. #StopTheIncitement pic.twitter.com/x4i6Lg0s06

In addition to these institutions, NGOs dedicated to Israeli advocacy, such as StandWithUs and the Israel Project, are also taking an active part in spreading Israel’s online narrative as can be seen in the Facebook posts below.

Finally, this network is joined by financial corporations and regular Israeli citizens. The latter use their own social media profiles to spread content authored by the MFA among their social networks. Such content may be more effective than that disseminated online by the MFA which some view as “Twipoganda” rather than “Twiplomacy”.  The Facebook post below was shared by an Israeli. The young Israeli tagged news organizations the world over so that they too would watch this video praising attack of Israelis in Jerusalem.

Financial corporations do, at times, also create their own material realizing that their brand and brand Israel are forever intertwined. Below is such a video showed at a recent conference on mobile technologies in Israel. 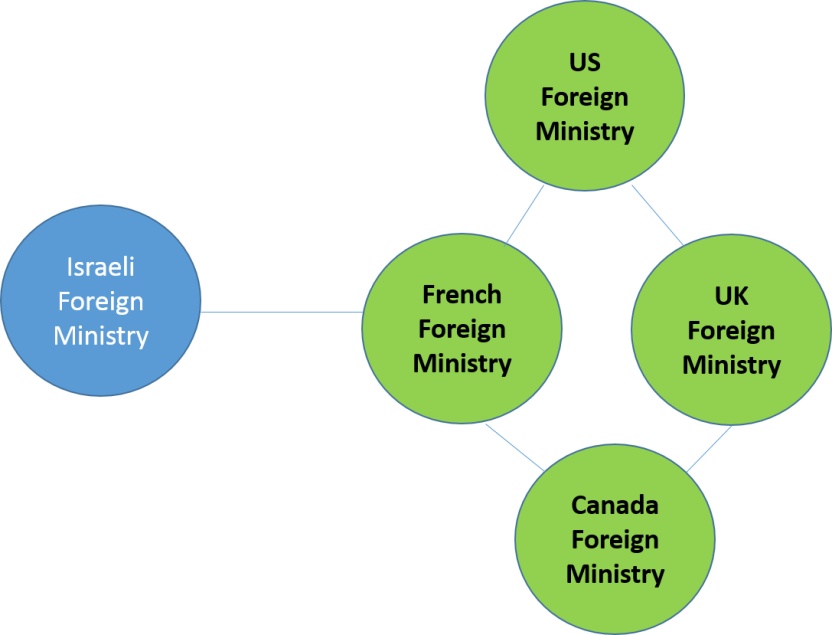 Of course information in networks flows both ways. By following its peers on twitter, the Israeli MFA is able to ascertain how foreign nations are narrating the crisis and how they understand its root causes and possible resolution. Below are examples of tweets published by the US and UK MFAs.

Today, @IsraeliPM @Netanyahu and I discussed ways to try to bring an end to the violence, find a better way forward. pic.twitter.com/uWFHNVvNQd

The MFA is also part of its own social network, consisting of the MFA and its embassies located in capitals throughout the world. It is through this network that the MFA can immediately comment on events taking place in real time and reach a global audience.

In addition, it is possible that the MFA is able to increase the effectiveness of its global public diplomacy campaign if Israeli embassies tailor social media content to the characteristics of their followers with regard to culture, language, history and values.

Below are tweets published over the last two weeks by Israeli embassies thus carrying Israel’s narrative to global audiences. 4th degree narration: social network of embassies to a capital

If one focuses on a specific Israeli embassy, it soon finds that is part of the social network of embassies to a certain capital. Like MFAs, embassies to capitals now routinely follow one another on social media in order to gather and disseminate relevant information. Below is a tweet published by the US embassy to the UK dealing with the current cycle of violence in Israel.

Embassies are also part of an additional social network, one consisting of itself and target audiences with whom embassies traditionally converse. These include news organization, journalists and Diasporas. In the case of an Israeli embassy, this network also includes Israeli expats who over the past two weeks are increasingly active on social media using their own networks to disseminate Israeli foreign policy messages. Israeli embassies also have close ties with Jewish organisations. These organization create the final social network explored in this post- that of Jewish organizations spread throughout the world. 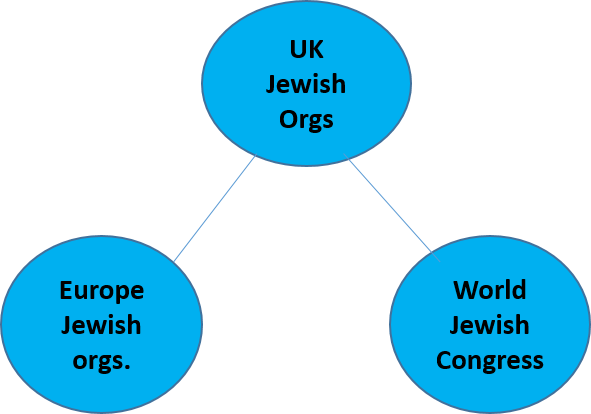 Jewish organizations throughout the world have traditionally created networks through which information is speared and which foster cross national collaboration. Although recent years have seen a rift between Israel and some Jewish organizations, when crises erupt this organizations take it upon themselves to narrate Israeli foreign policy. Below are some examples of these organizations’ activities over the past two weeks.

6th degrees of narration: An overview

If we combine all degrees of narration explored in this post, and all networks analysed, we have an overview of the extent to which crisis diplomacy is now networked. 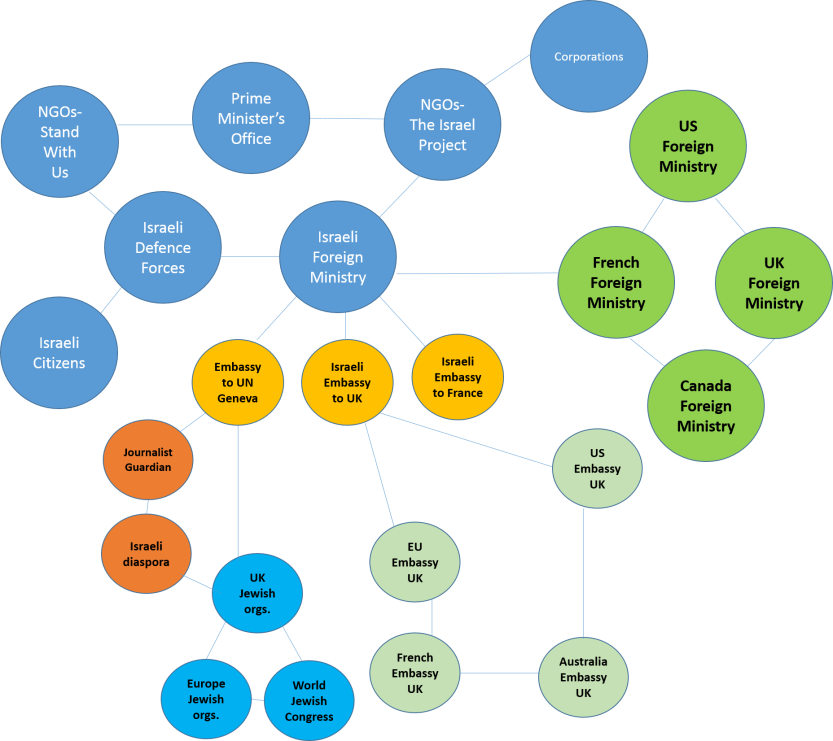 Of course crisis management networks, such as the Israeli ones portrayed in this post, also serve as information networks. For instance, a French embassy may gather information shared online by an Israeli embassy and transmit it to the French MFA. This, in turn, would use this information to analyse a crisis. Once this analysis ends, it is likely to tweets its stance on the issue at hand. The French tweets would then be analysed by the Israeli MFA and shared with other Israeli ministries. Such information gathering is shown in the image below in which red lines symbolize transfer of information from one diplomatic institution to another. 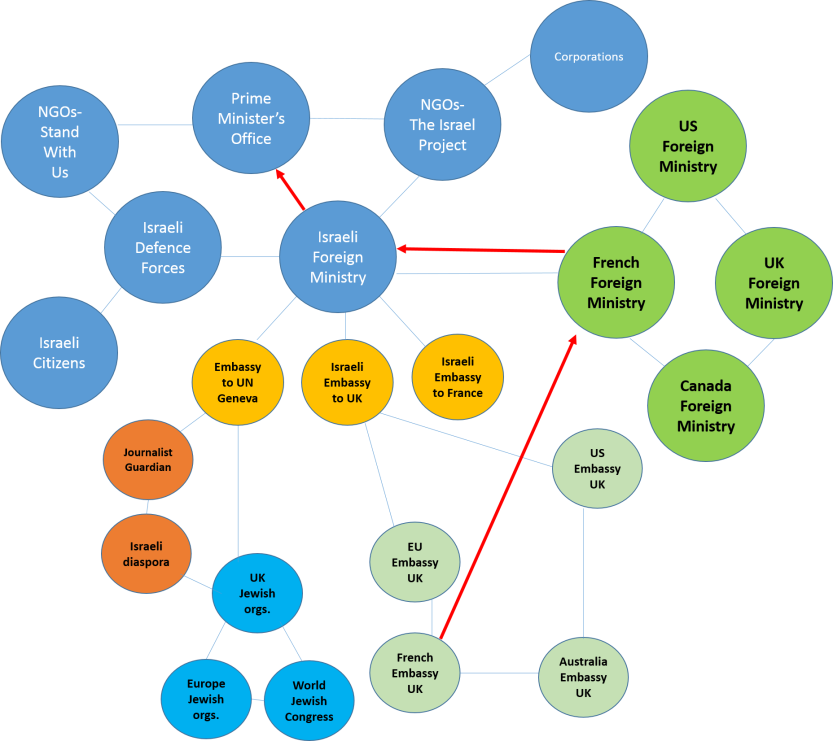 Naturally, this post  does not come close to analyzing all ties and all networks that now co-exist online. However, this post does attempt to demonstrate the transition from club diplomacy to network diplomacy suggested by Hiene .

It also important to mention that some of the networks analysed in this post are independent of the MFA. Financial corporations, NGOs and private citizens may all contribute to a global advocacy campaign by their own initiative. An interesting question is to what extent is the MFA aware of the activity these private individuals and NGOs, and to what extent does is supply these groups with materials and know how in advocacy? Such questions will be addressed in an upcoming digital diplomacy conference to take place on the 30-31/3/2016 at Tel Aviv University.

For more details, see this link.

One thought on “Six Degrees of Foreign Policy Narration”