Over the past few months, I have dedicated much time to analyzing the social networks of digital diplomacy. My assumption was that ministries of foreign affairs, embassies and other diplomatic institutions now routinely follow one another on social networks such as twitter and Facebook. This assumption was based on the fact that by following their peers online, diplomatic institutions can gather important information such as other nations’ foreign policy initiatives.

However, in the age of digital diplomacy diplomatic institutions are not the only ones to have joined the tweetosphere. World leaders have also flocked to SNS over the past few years. Some, such as US President Barack Obama or India’s Prime Minister Modi, first joined twitter during their political campaigns. Others, such as Iranian President Hasan Rouhani, joined in order to communicate with global audiences and news organizations even though twitter is blocked in their country.

Some world leaders use twitter to promote their domestic agenda. Such is the case with the tweet below published by President Obama which aims to promote the cause of same-sex marriage in the US.

Retweet if you're a proud supporter of marriage equality. #LoveIsLove pic.twitter.com/4nrRggtujD

Others use twitter in order to communicate with global audiences as is the case with the tweet below published by India’s Modi ahead of his state visit to Japan.

The Social Network of World Leaders 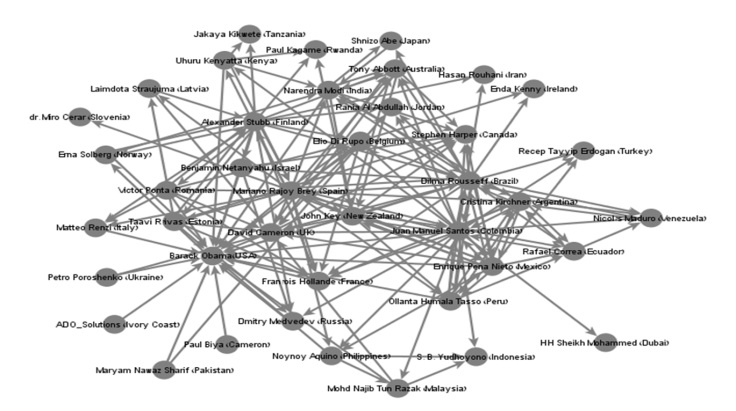 As can be seen, this social network seems to be quite scattered with no densely populated area that comprises the heart of the network. This is a result of the fact that world leaders are not avid followers of their online peers. In fact, the average world leader is followed by only four of his peers.

Ten most popular world leaders among their peers 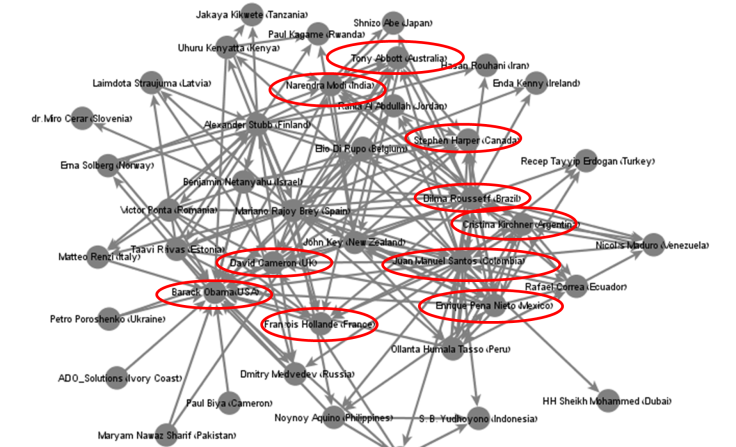 It is important to note that a world leader’s popularity among his peers is not a vanity contest. The more world leaders follow Barack Obama, the greater his ability to disseminate foreign policy messages to his peers.

Ten world leaders that are most avid followers of their peers

Finally, I decided to analyze which world leaders serve as important hubs of information as they connect world leaders that do not follow one another directly. The world leader who is the most important hub of information is US President Barack Obama. In second place comes Norway’s PM Erna Solberg. Next is Spain’s Mariano Rajoy Brey, Colombia’s Juan Manuel Santos, India’s Modi, New Zealand’s John Key, Australia’s Tony Abbott, the UK’s David Cameron and finally Mexico’s Enrique Peña Nieto.

Ten most important hubs of information 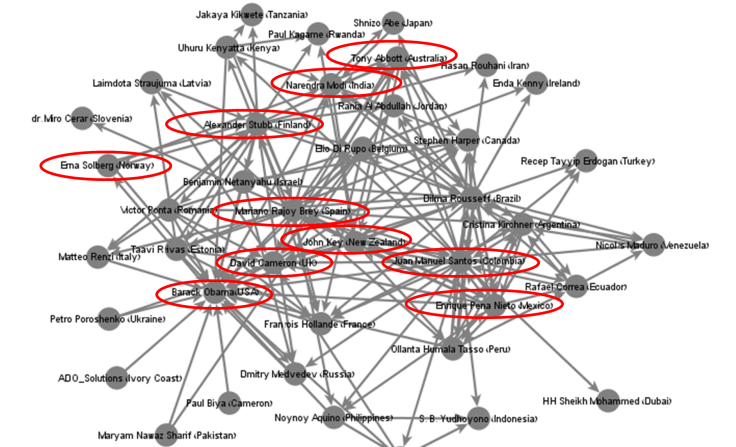 At the moment, there are only three world leaders that are highly popular, serve as important hubs of information and actively follow their peers and they are India’s PM Narendra Modi, Mexico’s Enrique Peña Nieto and Colombia’s Juan Manuel Santos. In general, this analysis finds that Latin American world leaders are more engaged in Twiplomacy than many European and Eastern European world leaders. Moreover, a country’s newsworthiness does not seem to effect its leader’s popularity among his peers. Iranaian President Rouhani, Israel’s PM Netanyahu and Ukrainian PM Poroshenko are among the least popular leaders in this network despite their country’s high profile. 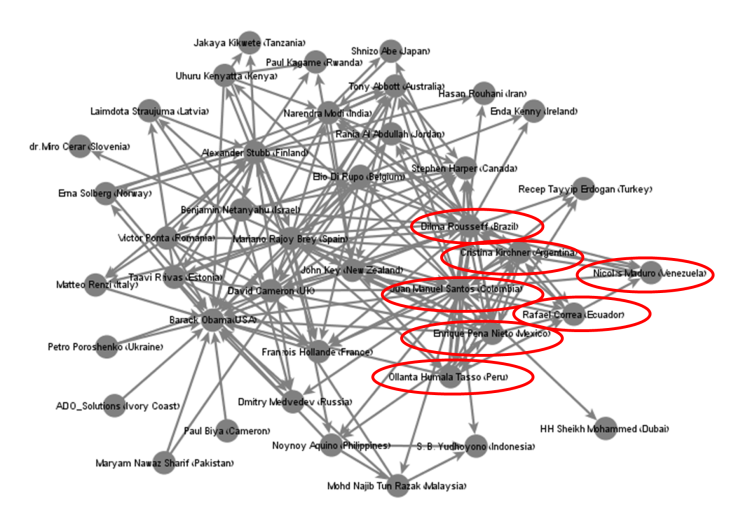 This is also the case with African leaders and Asian leaders who also form their own hub as can be seen in the image below. 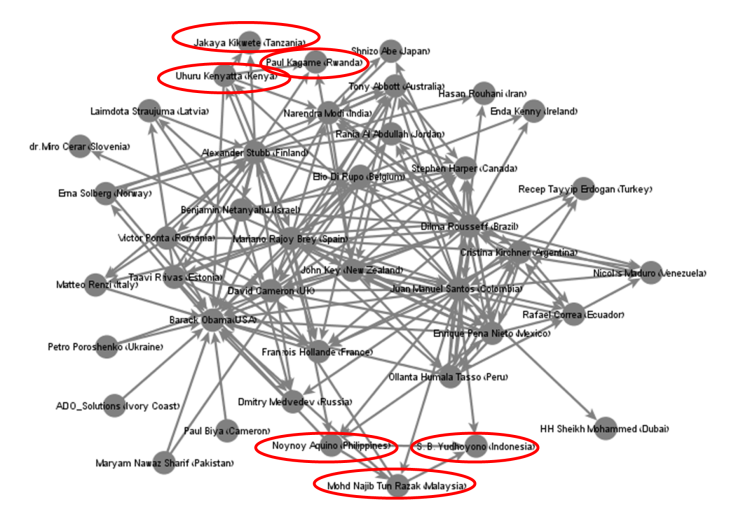 3 thoughts on “The Social Network of World Leaders on Twitter”