I have often wondered if foreign ministries follow each other on twitter, and if so, do foreign ministries regard twitter as an important source of information. After all, by monitoring the Ukrainian ministry of foreign affairs’ twitter channel world governments can gather important information regarding events shaping this country’s future as they unfold. Likewise, by monitoring Israel’s official twitter channel, world governments can better understand the Israeli government’s stance on the negotiations with the Palestinians.

Using the Visone program, I mapped this new social network as can be seen in the illustration below. 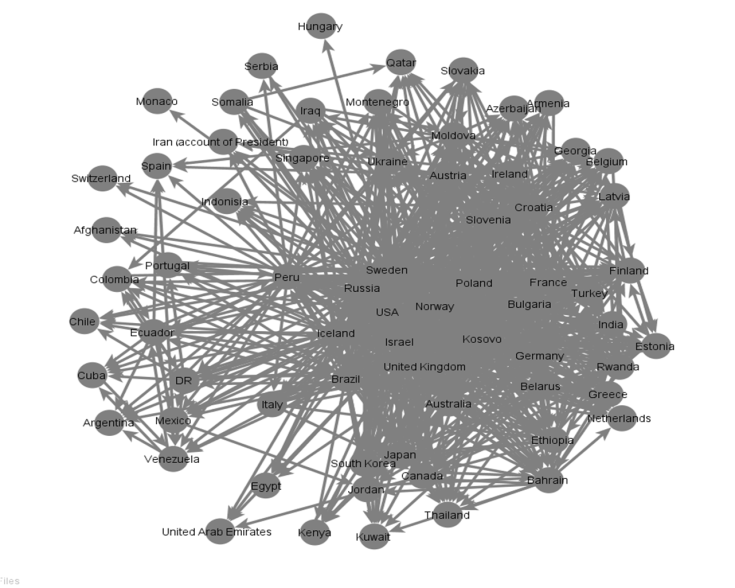 The most dense area of the network, or its core, includes both the most popular ministries in this network as well as those ministries that are avid followers of their peers on twitter.

Characterizing this network called for the calculation of three parameters: in-degree, out-degree and betweenness.

With regard to popularity, or the in-degree parameter, it appears that the United States and the United Kingdom are the equivalent of a high school quarterback in this social network each followed by 43 other ministries (See illustration below). In third place is Poland followed by Russia, Sweden, Israel, India, France, Germany and Turkey which comes in at tenth place.

The out-degree parameter, which indicates the amount of ministries with whom one ministry has contact, is of paramount importance in this network as the higher a ministry’s out-degree score, the greater its ability to disseminate information throughout the network. The country with the highest out-degree is Iceland followed by Sweden, Israel, Norway, Russia, Poland, Kosovo, Bulgaria, Brazil and Peru (See illustration below).

It is important to note that Sweden, Israel, Russia and Poland are the only countries to appear in both lists indicating that they are highly popular and able to effectively disseminate information throughout the network.

Calculating the betweenness parameter revealed which ministries serve as important hubs of information linking together ministries that do not follow each other directly. The country with the heights betweenness score is Sweden followed by the UK, Russia, USA, Poland, Israel, Norway, Brazil Iceland and Ecuador.

The only countries to receive high scores on all three parameters,  or the A-Team of digital diplomacy, are Sweden, Russia, Poland and Israel.

It is interesting to note that all South America countries seem to huddle together at the periphery of the network with Ecuador serving as an important information hub for this group (See illustration below). 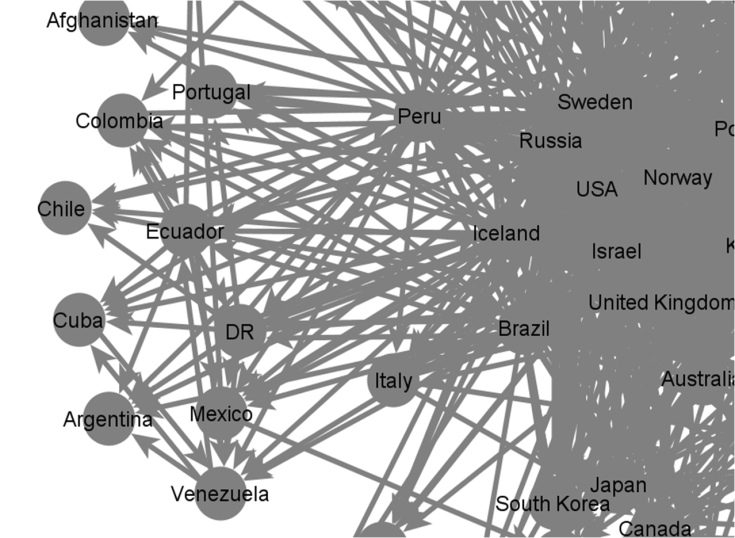 As can be seen below, there are additional findings that warrant attention. First is the relatively poor standing of the President of Iran’s official twitter account. While Iran dominates world news, it is not dominant in this network. This could, however, be the result of the fact that the channel evaluated here belongs to a political figure and is not the foreign ministry’s official twitter channel (which I have yet to find).

Secondly, as opposed to Kenya and Somalia, Rwanda and Ethiopia are followed by many ministries and are therefore located near the core of this network. Thirdly, this network shows Ukraine to be somewhat isolated which is surprising given its current prominence in world news. However, the data presented here was gathered during the beginning of January before tensions in Ukraine reached fever pitch. Currently,Ukraine’s foreign ministry  is followed by 27 other ministries in this network making it the tenth most popular ministry bumping Turkey to eleventh place.

Finally, like South American countries, most Arab states in this network are huddled in its periphery. A possible explanation for this similarity is the fact that most of these countries tweet in local languages (i.e., Spanish and Arabic) and not in English. 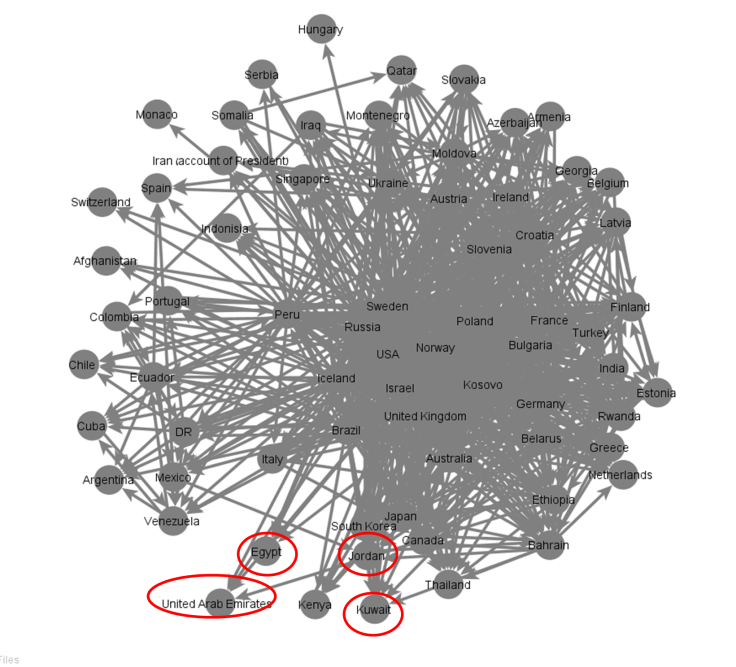 24 thoughts on “The Social Network of Foreign Ministries”

Leave a Reply to A guy Cancel reply