In May of 2014, I published my analysis of the social network of world foreign ministries (MFAs) on twitter. My assumption was that MFAs would actively follow one another online in order to gather relevant information. For instance, by following other ministries an MFA may be able to identify policy changes in certain countries, anticipate new foreign policy initiatives and predict possible crises in diplomacy. Moreover, if an MFA is followed by many of its peers online it may be able to disseminate information throughout the entire diplomatic milieu with the click of a button.

My 2014 analysis showed that the average MFA was followed by a mere 14 of its pees on Twitter. In November of 2015, I analyzed the social network of MFAs yet again finding that the average MFA was now followed by 28 of its peers. These results suggested that MFAs increasingly follow one another on Twitter thereby creating dense information networks.

This year, I returned to my sample of 77 MFAs in order to examine the 2017 social network of MFAs. To my surprise, I found that the average MFA in the sample was now followed by 34 of its peers, nearly half the sample. Moreover, the median number of peers each MFA attracts rose from 13 in 2014, to 40 in 2016. 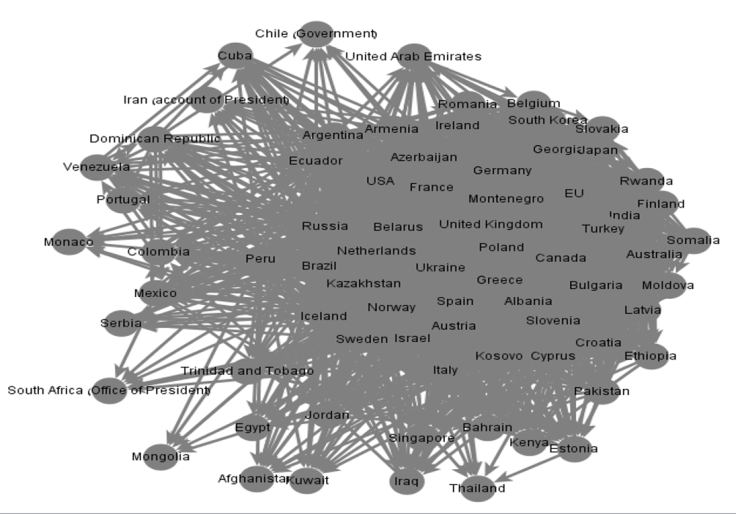 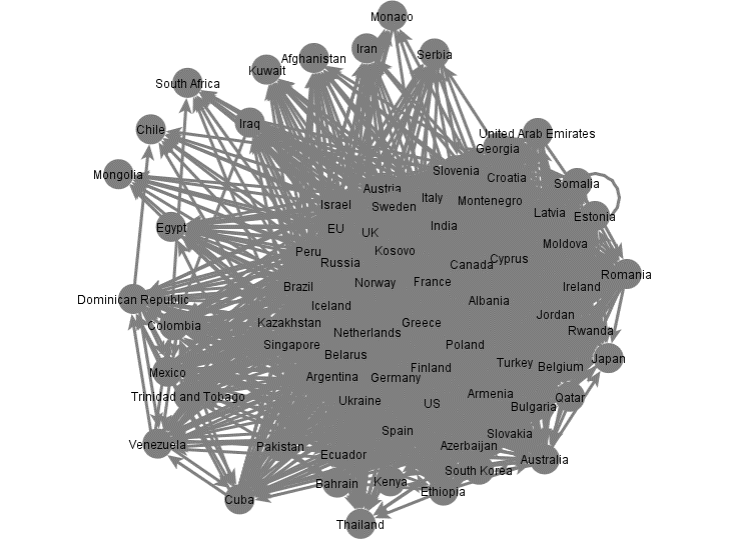 As can be seen, the core of the network (the densely populated gray area) has continued to grow with each passing year meaning that following one’s peers on Twitter has become the norm for MFAs. Moreover, the periphery of the network continues to shrink in size.

In order to analyze this social network of MFAs, I calculated three parameters. The first is the in-degree parameter which measures the popularity of each MFA in the network. This is an important parameter as the more popular an MFA, the greater its ability to disseminate information to the global diplomatic milieu. The table below presents the 10 most popular MFAs in this network. Likewise, it details changes in the ranking of each MFA (note that some MFAs are tied. For instance Norway and the EU are tied in fourth place).

The 2017 Social Network of Foreign Ministries- In Degree Parameter 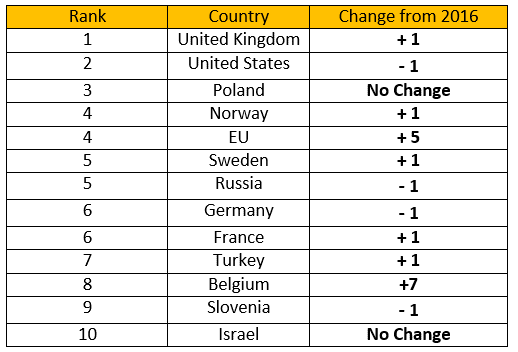 As can be seen, the majority of the MFAs that scored highest in the in-degree parameter last year also scored high in 2017. This suggests that there is a certain stability in the popularity of MFAs among their peers. This finding also validates the claim of Firestone and Dong who argue that super-nodes are destined to only grow larger within a given network. The exception to this rule seems to be Belgium that rose 7 place in its ranking.

It should be noted, that among the most followed MFAs, one also finds ministries from countries with limited Hard Power resources such as Poland, Norway, Belgium, Slovenia and Israel.

The MFAs with the highest in degree raking are also shown in the image below.

The second parameter I calculated was the out-degree parameter. This indicates which MFAs are the most avid followers of their peers. This parameter is also of great importance as the more Foreign Ministries one follows the grater his ability to gather information from his peers. The table below presents the 10 MFAs that are most avid followers of their peers. Likewise, it details changes in the ranking of each MFA.

The 2017 Social Network of Foreign Ministries- Out Degree Parameter

The out-degree results of 2017 were quite different than last year’s. As can be seen, the United Kingdom rose 24 places and is now one of the most avid followers of its peers on Twitter. Argentina rose 40 places in its rank and is also an avid follower of its peers.

Notably, Spain, Kosovo, Greece and Belarus all went down in this year’s ranking and are no longer among the 10 MFAs with the highest out-degree score. In general, the results of this year’s analysis suggest that MFAs are much more active followers of their peers than they were in 2015 or 2014. This could suggest that MFAs now view a peer’s social media account as an important source of information.

The MFAs with the highest out degree raking are also shown in the image below.

Finally, I calculated the betweenness parameter. This parameter identifies which MFAs serve as important hubs of information as they connect Ministries that do not follow one another directly. The table below presents the 10 MFAs that received the highest betweenness scores. These are also identified in the social network in the image that follows.

Notably, this is the first year since 2014 that neither Poland nor the US scored a high betweenness ranking. In 2015 Poland had the 6th highest betweenness score while in 2017 its ranks 15. The US State Department which ranked 9 in 2015 is now ranked 13.

The MFAs with the highest betweenness raking are also shown in the image below. 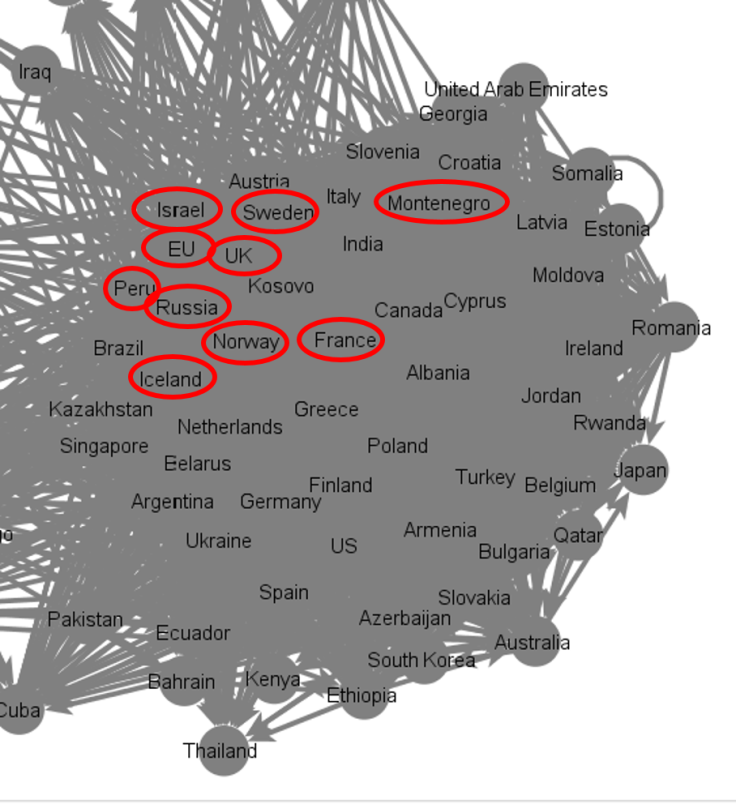 The only MFAs to score high on all three parameters in 2017 are the UK, Norway, EU, Sweden, Russia and Israel.

Russia, Sweden and Israel are also the only MFAs to consistently rank high on all parameters in 2014, 2015 and the present analysis. As such, they truly are the A-Team of Digital Diplomacy.

Finally, it is important to note that news worthiness and offline diplomatic engagement do not equal online prominence. When examining the periphery of the MFA social network one finds the Iraqi, Egyptian and Colombian MFAs, all of which have been prominently featured in this year’s new coverage.  In addition, the account of Iranian President Rouhani is also very much in the periphery of the network suggesting that the Charm Offensive has not translated into online prominence.

It is important to note that this year’s network exemplifies what I call social media mobility, a process in which smaller nations attain a high online visibility. The image below identifies several nations that despite their size, and influence on global diplomacy, are located at the very core of the MFA social network.