Diplomacy and International Relations scholars have argued that ours is the age of complexity. Global challenges such as health pandemics, climate change and migration necessitate trans-national cooperation as no nation can address these issues alone. Furthermore, in a globalized world domestic policies have international ramifications. One country’s open border policy can lead to an influx of immigrants in another. Likewise, one nation’s drug enforcement policy can send ripple effects throughout an entire continent. Perhaps most representative of this age is Facebook’s “it’s complicated” button used by people trying to define their personal relationships.

Last week saw a prime example of the blurring between the domestic and the foreign with President Obama’s State of the Union Address. Traditionally, the State of the Union served as an opportunity for the US President to address both houses of Congress and update them on domestic matters. As the US Constitution states,

“He shall from time to time give to the Congress information of the state of the union, and recommend to their consideration such measures as he shall judge necessary and expedient.”

As such, the State of the Union was a domestic speech in which the President identified the challenges facing the nation as well as his legislative agenda to tackle such challenges.

It was not until the 20th century, and the introduction of the radio and television, that the State of the Union became an important political event. Prior to mass media, Presidents would often address Congress during the day or by written report. Nowadays, however, the address is delivered at night and broadcast throughout the US so as to reach the largest audience possible.

The advent of social media may have changed the nature of the State of the Union address yet again as it is now more of a globalspeech than a domestic one. While one may claim that foreign nations have taken an interest in the State of the Union for some decades, it is social media that has enabled US administration to brand this speech as one that is relevant to everyone everywhere.

Branding the State of the Union

The State of the Union campaign, revolving around the hashtag #SOTU, included posts published on the State Department’s Facebook profile alongside tweets from numerous US embassies around the world and high profile US officials such as Secretary of State Kerry and National Security Advisor Susan Rice.

Even more importantly, the address was branded as an opportunity for foreign populations to engage with t President Obama and share thier concerns regarding global issues and America’s world leadership. By so doing, the US was able to incorporate the State of the Union into the larger branding of the US as a nation committed to dialogue and engagement, be it with people of Kenya or the government of Iran.

Some examples of these posts and tweets are shown below.

.@JohnKerry delivers remarks on the U.S. foreign policy agenda for 2016 on January 13 at the National Defense University (@NDU_EDU). #SOTU

Prof. Corneliu Bjola has recently written a fascinating blog post on maximising the impact of digital diplomacy. What is most central in his post is the attempt assess the actual influence of digital diplomacy rather than its content. Following in his footsteps, I attempted to evaluate the State Department’s ability to attract a global audience to the State of the Union Address.

In order to do so, I mapped the global spread of the SOTU hashtag on twitter one day prior to the address. This was achieved by sing the Trendsmap application. In addition to its global spread, I analysed the hashtag’s use in regions that are of special interest to the US: Asia (given Obama’s Asian pivot), the Middle East and Africa.

Global Use of #SOTU- One Day Prior to the Address

As can be seen in the image above, one day prior to the State of the Union Address the SOTU hashtag was already trending in several geographic areas. However, there seems to be little use of the hashtag in Africa and the Middle East, regions I assumed the US was targeting.

A closer analysis revealed #SOTU was used in only four Africa countries and was not trending at all in the Middle East.

In order to analyse the online discourse related to the SOTU hashtag I used the Hashtagify application. As seen the image below, the hashtags most related to SOTU are all domestic hashtags including: GOP (Republican Party), tcot (top conservatives on twitter), foxnewschat, POTUS (President of the United States) and loveislove referencing LGBTQ rights. These hashtagssuggest that the online conversation regarding #SOTU was mostly domestic and not global.

Next, I analysed the SOTU hashtag on twitter five hours after the address had taken place.

Global Use of #SOTU- Five Hours after the Address

As can be seen in the image above, #SOTU had a significant global spread five hours following the actual Address ended. What is most striking is #SOTU’s prevalence in Africa.

However, a more in-depth analysis offered “complicated” results. The image below depicts the spread of the SOTU and Obama hashtags in Africa. As can be seen, these are dominant in only select countries such as Ethiopia, South Africa and Kenya. There seems to be no use of this hashtag in North African (i.e., Lybia, Morocco) and many central African countries (i.e., Mali, Niger, Chad, Sudan).

Use of #SOTU in Africa- Five Hours after the Address

When looking at the Middle East, the SOTU hashtag is not at all present. From Egypt to Iraq and Lebanon to Israel, twitter users did not appear to engage with Obama’s address.

Use of #SOTU in Middle East- Five Hours after the Address

The same is true of Asia. The image below suggests that while the SOTU hashtag was used in Asian countries, it was by no means a dominant hashtag or a central element of the online conversation at that time.

Use of #SOTU in Asia- Five Hours after the Address 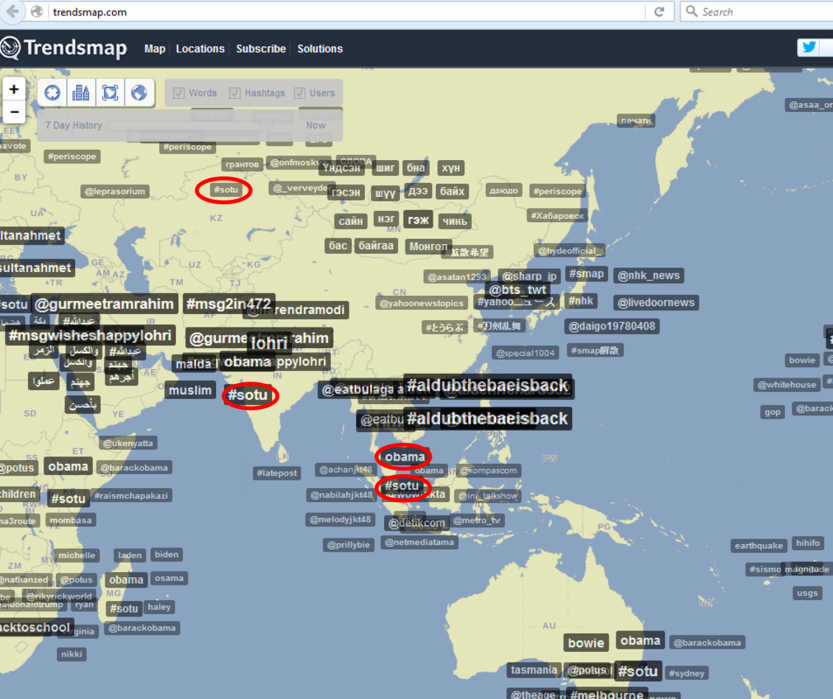 In summary, when looking at the global spread of #SOTU, it seems that it was mostly popular in Western Europe, the US and Oceania (Australia and New Zealand). So while the address did attract global attention, it may have failed to do so in regions that the US had specifically targeted.

As was the case prior to the address, the ten most related hashtags to SOTU after the State of the Union were all related to domestic issues. These can be seen in the image below.

The results of the analysis presented in this post tend to suggest that the #SOTU social media campaign was not instrumental in attracting, and engaging with, key audiences on global issues. However, serval limitations should be mentioned.

First, the applications used in this post use only a sample of all tweets published at a given time. Thus, the global spread of SOTU may have been much greater.  Secondly, the analysis focused on the hours before and after the address. It is quite possible that SOTU had a much different geographical spread during the address itself. As shown in the graph below, it was during the address delivered by President Obama that the use of #SOTU was most prevalent.

Finally, it is possible that the State Department did not target the audiences I have identified as being relevant (i.e., Middle East, Asia) but rather focused on US allies.

Next week, I shall be blogging about digital diplomacy in Africa. Until then, tweet me @Ilan_Manor