Last week I posted an evaluation of how the US and UK governments are using Twitter in their struggle against ISIS. The analysis found two main differences in these governments’’ use of twitter. First, the UK against Daesh twitter channel seems to focus on two-way engagement with followers while the Think Again Turn Away appears to focus more on one way information dissemination. Secondly, the UK channel offers a narrative according to which the international coalition is making steady progress in its fight against ISIS. Moreover, the Syrian opposition is ready and able to lead Syria in the day after ISIS. The US narrative focuses more on the global war against ISIS and the disillusionment of people with ISIS.

This week I decided to explore how these two twitter channels are alike and how they are different.

How are they alike?

However, there are also many similarities between the two channels. For instance, both channels often re-tweet another as can be seen in the examples below. Secondly, both use English and third both refer to ISIS as #Deash or #ISIS. The use of English caused to me to wonder who the target audiences of these channels are. As tweets are not in Arabic or other languages used in the Middle East I assumed they are not directed at youngsters thinking of joining ISIS or people who have already done so. Likewise, as tweets do not deal with events in one country, they do not target one population. Thus it is possible that these channels are meant to rally public support for the actions of both governments amongst their domestic populations and populations in other countries that are critical of the coalition against ISIS.

Using TrendsMap I evaluated the use of the hashtags #ISIS and #Daesh around the world. As the two maps below demonstrate, both hashtags have a global spread that if focused on the Western World, namely the US and Europe. However, the ISIS hashtag is substantially more popular than the Daesh one. 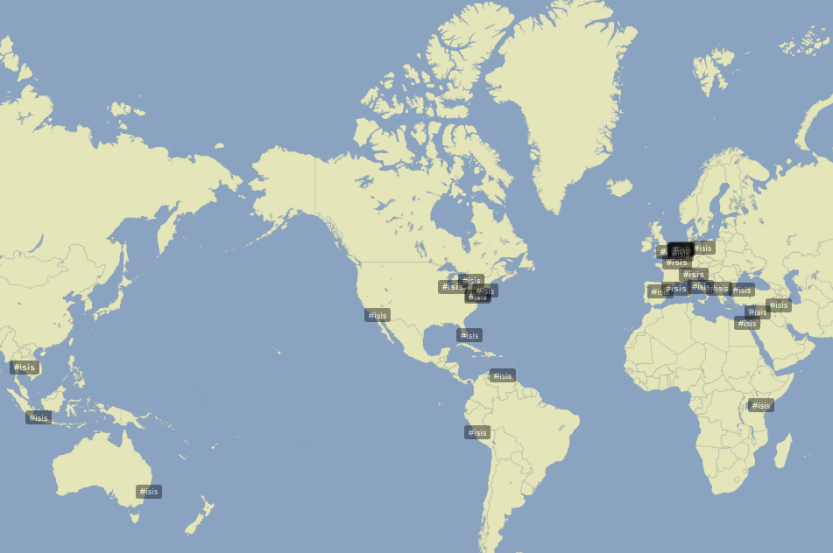 In addition, as can be seen below both hashtags seem to be used in countries that are participating in the coalition against ISIS including France, Belgium and the Netherlands. 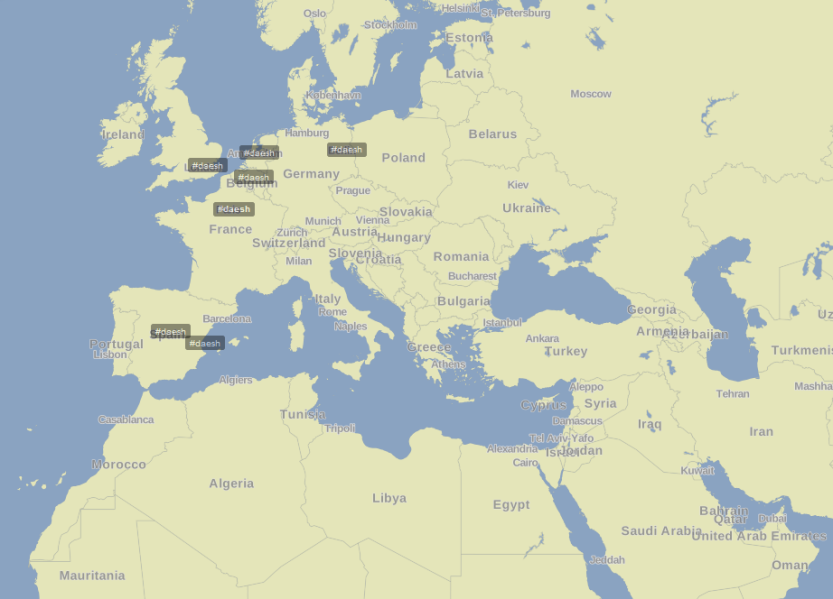 However, the domestic use of the hashtags #ISIS and #Deash seems rather limited in the US and UK as is shown below. Thus, it seems these countries are able to target populations of nations that are participating in the coalition against Daesh but do not necessarily reach their own domestic populations. 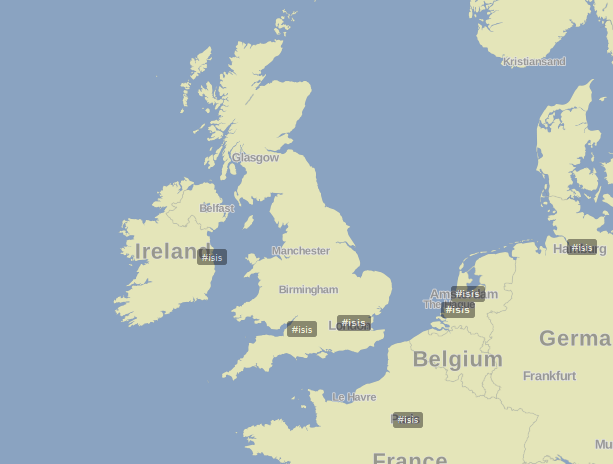 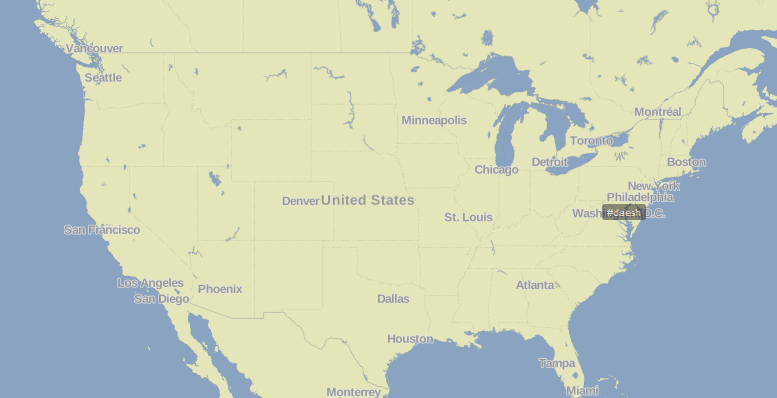 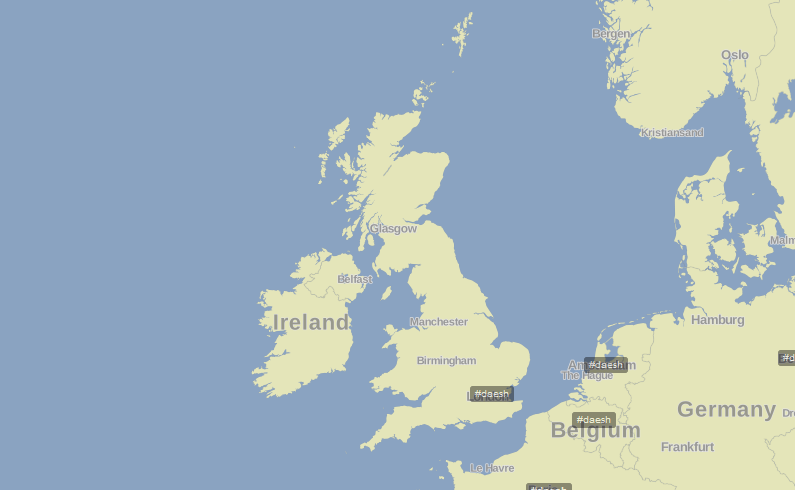 In addition to using the ISIS and Daesh hashtags, both twitter channels employ the #DefeatingDaesh and #CoalitionProgress hashtags. This caused me to wonder if both hashtags are related to one another online and if they are also related to other hashtags that are relevant to the struggle against Daesh. Using hashtagify I analysed both hashtags as can be seen below. Results suggest that #CoalitionProgress and #DefeatingDaesh are related to one another and to other relevant hashtags such as: Daesh, Syria, Lydia, ISIS, ISIL anti-ISIL. 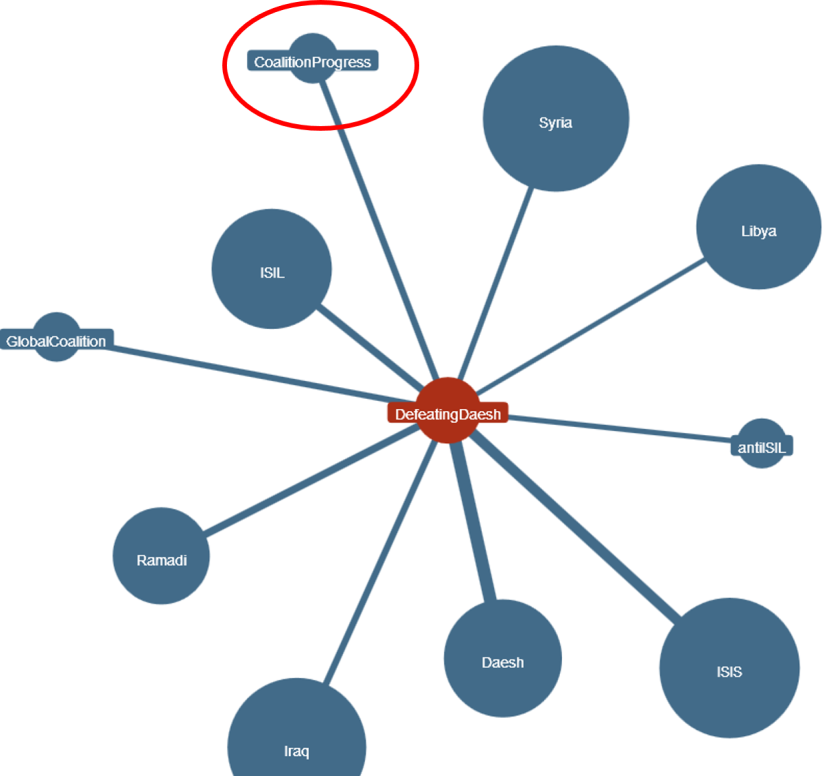 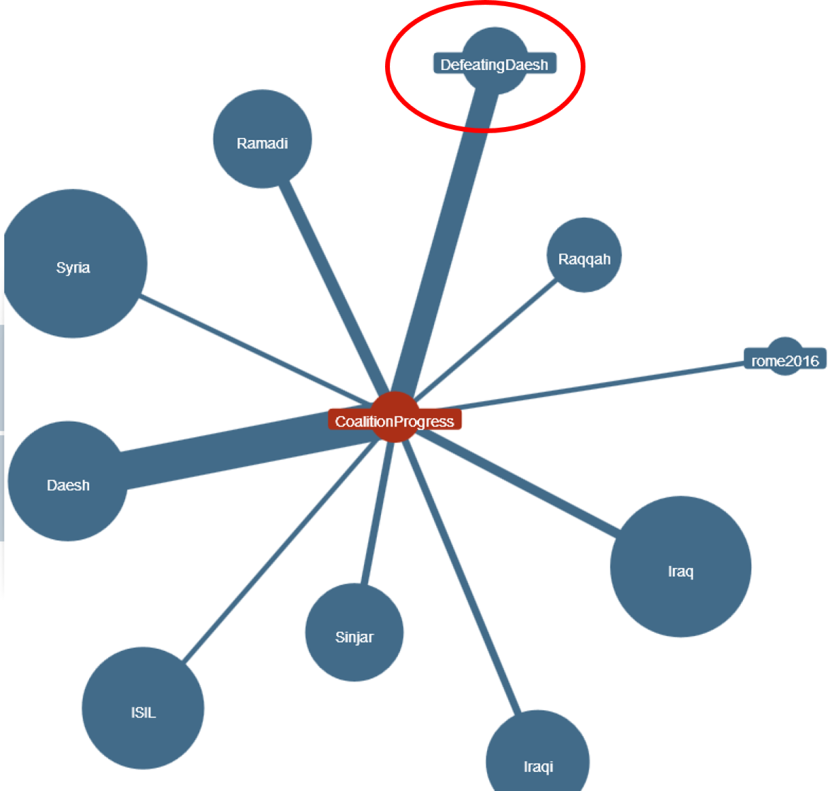 The linkage between the hashtags used by the US and UK governments, and their relationship with other hashtags used in the anti-ISIS discourse caused me to think that both governments have been able to become part of the online eco-system that encompasses the online discussions on the fight against Daesh. To explore this hypothesis, I used the RiteTag application to better map all hashtags that are related to #CoalitionProgress and #DefeatingDeash. This visualizations is shown below.

As can be seen in the image above, the #CoalitionProgress and #DefeatingDeash are indeed related to one another, and more importantly, they are related to a plethora of hashtags dealing with Deash including: : #globalcoalition, #unitedaganistdaesh, #Daesh #Iraq #Coalition #Terror #Syria and many more.

It is therefore possible that by linking their two accounts to one another, both in content and in hashtags, the US and UK governments have amplified their online reach and their centrality in the online conversations about Daesh.

Using another twitter analytic tool, I calculated that combined reach of the #CoalitionProgress and #DefeatingDeash hashtags is 647,575 and they reach 900,000 impressions. However, these also seems to be some difference between the two hashtags. As can be seen in the table below, over the past month the DefeatingDaesh hashtag was used in more tweets than the CoalitionProgress hashtag. 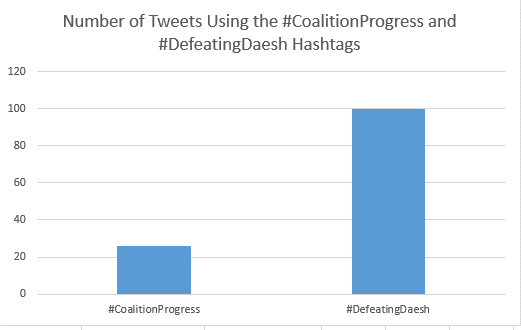 However, the reach and impressions of #CoalitionProgress are greater than that of #DefeatingDaesh.

The explanation for this discrepancy might lie in the fact that the CoalitionProgress hashtag is also used in other popular accounts including as the spokesman for the coalition against Daesh, Colonel Steve Warren, Canada’s digital diplomacy channels and UK embassies around the world.

How are they different?

As stated above, last week’s analysis demonstrated that over the past two months, the UK government has used the UKagainstDaesh for dialogue with followers be in the form of Q&A sessions, answering followers’ questions or using surveys to explore followers’ interests. The US, on the other hand, has made little use of two way engagement over the last two months.

Given the different approaches on theses channels, I decided to compare their reach and ability to attract followers. I did so using the Twitter Counter application. As can be shown in the images below, over the last month the US Think Again Turn Away channel gained 520 followers. The UK against Daesh channel gained more than 1,000 followers, a sizeable difference.

The gains made by the UK’s channel may be in part due to its dialogic approach to digital diplomacy. Yet they are also a result of the UK’s daily activity which was found to be greater than that of the US (See table below)

This analysis, which was also limited to one month, finds that the UK against Daesh accounts tweets more on average per day and follows more twitter channels per day. This may explain the third results which is the UK’s ability to attract more followers per day given that online activity, and creation of online ties with other users, breeds social media followers. 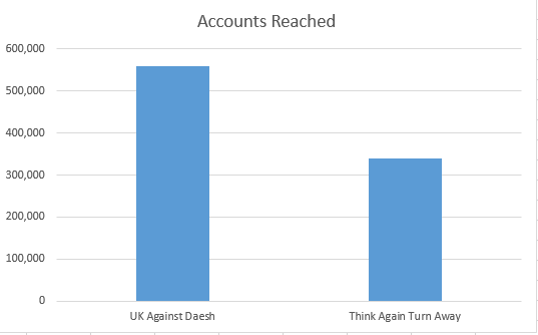 Finally, I was able to visualize the followers of the UK’s UK against Daesh channel (based on a sample of users and using the MOZ twitter application). This global distribution is shown in the image below. Unfortunately, I could not visualize the US’ followers given the fact that the US has more than 25,000 followers.

This post evaluated the different approaches of the US and UK to fighting ISIS online. It offers two interesting conclusions. First, the US and UK seem to have created a “special online relationship” in which they share content and hashtags. By so doing, they are able to amplify the reach of their narratives, messages and content. Moreover, they are able to create an online eco-system that encompasses the discussions on the fight against Daesh.

However, when looking at the differences in the models they apply online, it seems that UK has adopt three strategies that enable to attract many new followers. These are high levels of daily activity, following many other users and adopting a digital diplomacy approach that favours dialogue over monologue.