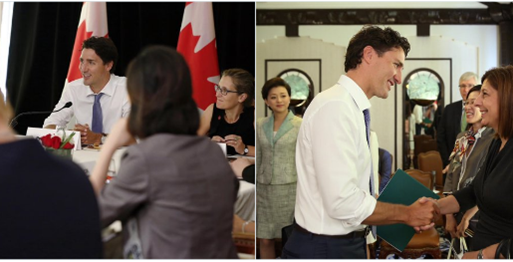 In September of 2009, John A. Quelch and Katherine E. Jocz penned an article titled “Can Brand Obama Rescue Brand America?” In this article, the authors postulate that the traits associated with brand Obama may help bolster the international image of America which, following the Bush presidency, was that of a polluting, greedy militaristic empire. Brand Obama, on the other hand, was associated with the values of uplift, hope, opportunity, tolerance and community.

National leaders often have a profound impact on their nation’s image. In some occurrences, leaders can have a Halo Effect in which their own attributes become the attributes associated with the nation they lead. Such was the case with Germany’s Angela Merkel whose leadership of the EU influenced the view of Germany as a global leader. Conversely, Vladimir Putin’s image as a Soviet era leader has facilitated the view of Russia as a re-emerging threat to the West.

Unlike the US, Canada’s brand has not been associated with militarism or a desire for global homogeny. In fact, Canada’s national brand has constantly ranked positively on various measurement scales such as the Good Country Index and the Soft Power 30. Indeed people around the world tend to view Canada as “good”. But not much beyond that.

This is perhaps the reason why many commentators and diplomats viewed the election of Justin Trudeau as an opportunity to revitalize brand Canada. The hope was that the young and energetic leader would have a Halo Effect of his own on brand Canada.

When managing their national brands, MFAs and governmental ministries often turn to social media. Indeed it is through social media that national brands can be created, evaluated and monitored. Moreover, through SNS content, MFAs can project their brand on a daily basis. Ervin Goffman may have referred to this as the presentation of the state in everyday life.

When evaluating Canadian digital diplomacy activity it becomes apparent that brand Trudeau has in fact become an important part of brand Canada. Content published by the Canadian PM on Twitter is continuously re-tweeted by various Canadian accounts including the MFA, the MFA’s development agency and the @Canada twitter channel which focuses mainly on nation branding activities. Moreover, these accounts often publish their own content featuring the PM. In fact, at the moment, the Canadian MFA’s twitter profile picture is that of the PM hosting the UN Secretary General.

By analysing the portrayal of the PM on twitter, I have found that brad Trudeau is currently composed of four elements.

Young, vibrant and informal- Tweets published on Canadian digital diplomacy channels often portray Trudeau as informal. Many images of the PM show him without the traditional pin stripped suite that world leaders are often associated with. The image below, for instance, depicts the PM with his sleeves rolled up evoking the image of both informality and a “hands on” leadership approach.

PM Trudeau holds a roundtable discussion with entrepreneurs highlighting the importance of women in business. pic.twitter.com/kI2FvUywvZ

Additionally, Trudeau is often pictured with younger Canadians or youths in general as can be seen below. Such images may be intended to highlight Trudeau’s relatively young age thereby suggesting that he represents a new generation of Canadian leaders. There is also an immediate contrast in these images with that of former Canadian PM Steven Harper who left office as a grey haired 57 year old. Thus, Trudeau symbolizes a changing of the guards in Canada.

Prime Minister Trudeau announces the #PMYouthCouncil. Have your say and make a difference in your community! pic.twitter.com/oL9dqQIDc8

Young voices must be part of the decision-making process! https://t.co/r7DDcXEhCa #PMYouthCouncilhttps://t.co/C8lYkJEwCM

PM Trudeau thanks @nyuniversity for hosting such an interesting discussion with students. #NYPM pic.twitter.com/tm8yRZP8Wa

The tweet below seems to best capture the youthful image of Trudeau being disseminated online. In the video Trudeau, is not just young and informal but he is also fit and perhaps, by extension, fit to lead.

A Digital Native- As opposed to Angela Merkel or François Hollande, Trudeau is portrayed online as a digital native, a young leader endowed with the ability to understand and harness the potential of digital technologies. Indeed one of the most famous videos of the PM features him explaining the logic behind quantum computers.

Canadian digital diplomacy channels also tend to portray Trudeau as a tech leader. For instance, in the tweets below, Trudeau holds a Q&A session with the chairman of Ali Baba, one of the world’s largest e-commerce companies. In another tweet, the PM and Ali-baba chairman announce a new technological initiative.

PM Trudeau is greeted by Alibaba’s Jack Ma, Chairman of the China Entrepreneur Club, for a Q&A session. pic.twitter.com/xAWTBIGNbF

Additionally, numerous tweets featuring the PM focus on Green technologies and the promotion of sustained development, as can be seen below. Such tweets are often published in advance of global summits alongside a promises by the PM to advance technological collaborations that can help stem the tide of climate change.

PM Trudeau discussed #ClimateChange with President @fhollande after they signed the #ParisAgreement pic.twitter.com/1WQCQmTEyC

Additionally, the PM is often portrayed online as an advocate of LGBT rights and equal employment opportunities for women. Tweets from the past year have featured the PM leading a Gay Pride Parade and raising the LGBT flag outside the Canadian parliament.

For the first time in history, the Rainbow Pride Flag flew over Parliament Hill in celebration of #PrideMonth pic.twitter.com/FCPZkqjsyH

In other instances, the PM takes to twitter in order to wish “happy holidays” to ethnic minorities in Canada. In such videos the PM repeatedly uses the word diversity stating that Canada draws its strength from is multi-faceted nature.

Finally, Trudeau is often depicted as empathic. During his recent trip to Poland, new outlets filmed the PM shedding a tear at the Auschwitz concentration camp. Similarly, Canadian digital diplomacy channels published images from the PM’s visit to Poland accompanied by a Holocausts survivor and his son.

PM Trudeau visited Babyn Yar, a ravine that was the site of one of the largest single massacres of the Holocaust. pic.twitter.com/hiMjZpt7IO

A Global Leader- The final component of brand Trudeau is that of a global leader, someone who is as comfortable among world leaders as he is among Canadian youths. Notably, Trudeau is often featured online as the host of other world leaders and is thus portrayed as Canada’s new gateway to the world.

In addition, Trudeau is often depicted online as a leader committed to fighting inequality, be it between rich and poor countries or between powerful and ailing countries. Such was the case during the recent global conference hosted by Canada to fight AIDS, Tuberculosis and Malaria.

Africa can count on Canada to be a strong partner to stop these diseases #EndItForGood pic.twitter.com/3BK7SSsYpE

From Brand Trudeau to Brand Canada

The image that arises from Canadian digital diplomacy channels is that of vitality- Trudeau is portrayed as a youthful, digitally literate leader looking to forge a new role for Canada in the world. In time, these attributes may indeed became part of brand Canada.

And perhaps this process is already taking shape. Canada is becoming synonymous with the battle against inequality, the promotion of LGBT rights and an open policy towards those most in need such as Syrian refugees. At a time when other nations are scrambling to formulate immigration and energy policies, Canada has emerged as a confident world leader.

One may question whether the images of national leaders, and nations in general, really matter. The cynic would say that nowadays the Selfie is more important than the Self and that MFAs are obsessed with images rather than policies. A public diplomacy scholar would argue that images matter as they enable nations to achieve their foreign policy goals. Nations that are perceived as “good” may find it easier to promote their foreign policy be it at the UN or when conversing online with foreign populations.

A digital diplomacy scholar could argue that through national images, countries can articulate their moral compass and, subsequently, find their role in global affairs.

BuzzFeed just released the video below in which Trudeau rates tweets directed at him. A perfect example of brand Trudeau.