Two weeks ago I evaluated the extent to which Donald Trump has been able to attract diplomats, MFAs, embassies and foreign affairs journalists to his Twitter account. My analysis suggested that most digital diplomats, and diplomatic institutions, do not follow Trump online.

This week, I decided to expand my analysis and see if world leaders in general were able to attract followers from specific online communities that are relevant to diplomacy. These include foreign affairs journalists and editors, MFAs, missions to the UN and multi-lateral organisations that are associated with the UN.

While leaders’ Twitter profiles may be used to communicate with foreign populations, they could also serve as platforms for diplomatic signalling. A tweet by the US President or French Prime Minister may include information pertaining to foreign policy changes, adoption of new policies and even possible military interventions.

In addition, leaders may use their Twitter channles in order to communicate indirectly with other world leaders. A Tweet by the British PM, for instance, might include a subtle threat aimed at the Kremlin.

However, the use of Twitter channels for diplomatic signalling necessitates that digital diplomats and diplomatic organization actually follow world leaders. In this post I evaluate if that is indeed the case.

In order to answer this post’s question, I used a sample of 20 world leaders that attract a large following on Twitter. The sample was based on the recent report published by Twiplomacy and included the following accounts:

I began my analysis by examining the number of news outlets, media channels, foreign affairs journalists, foreign affairs editors and newspapers that follow each world leader on Twitter. The results of this analysis may be seen in the image below.

Next, I analysed the number of MFAs following my 20 world leaders on Twitter. The results of this analysis may be seen below.

Notably, in digital diplomacy the question is often one of quality of followers rather than quantity. If a world leader is followed by all G20 countries, we may deduce that he can use his Twitter channel for effective diplomatic signalling. The same cannot be said for a leader that attracts 10 MFAs from relatively small countries. However, the results of my analysis do suggest that most world leaders do not attract many MFAs and may thus have a limited ability to use their account as a platform for signalling.

In my next analysis, I calculated the number of missions to the UN in NY and UN in Geneva that follow my 20 world leaders on Twitter. The results of these analyses may be seen in the images below. 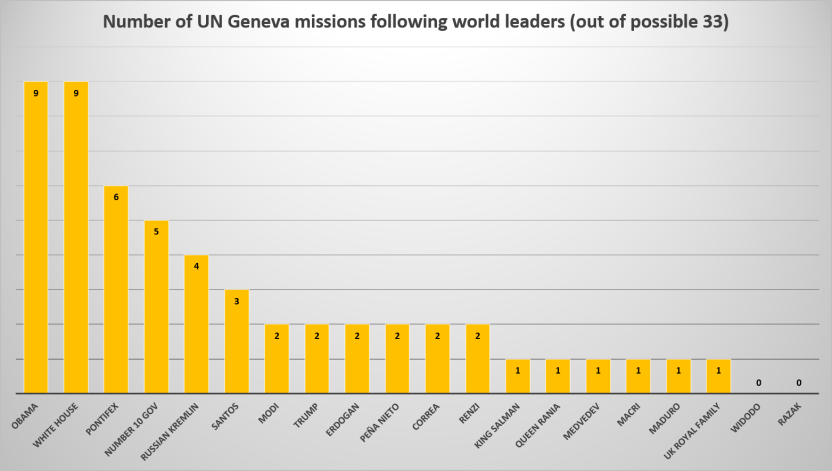 As can be seen, only President Obama and the White House are able to attract a sizeable following among UN missions. Yet even Obama attracts only 15 mission out of 33 in NY, and 9 missions our of 33 in Geneva. The average world leader is followed be a mere 4 mission in NY and 3 missions in Geneva. These results suggest that UN missions do not view world leaders’ Twitter accounts as an important source of information that is relevant to their work. Notably, even leaders of G20 countries such as India, Indonesia, Italy and Argentina do not attract many UN missions.

For my final analysis I evaluated world leaders’ ability to attract multi-lateral organization on Twitter. 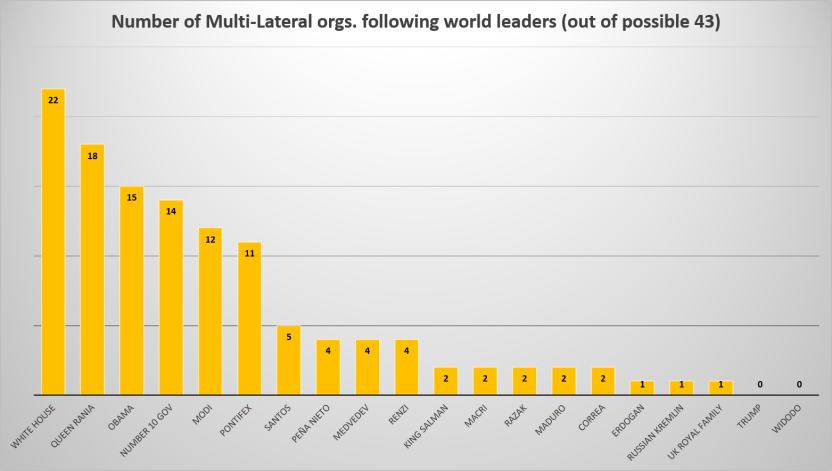 The results of this analysis echo those of the previous section. Only the White House attracts a sizable following (half of the Multi-Lateral organizations evaluated). However, it should be noted that some world leaders seem to be more popular among multi-lateral organizations then they are among UN missions and MFAs. These include Queen Rania of Jordan and Prime Minister Modi.

These results, coupled with those of the MFA and UN mission analysis, beg the question- is Twitter really a medium for Twiplomacy, or is it only a medium for public diplomacy and nation branding given that leaders’ images affect national images? Given that digital diplomats don’t follow world leaders online, is the importance of Twiplomacy overstated?

Finally, I examined the extent to which world leaders follow one another online. For this analysis I used a sample of 33 world leaders identified as amassing a large following by the Twiplomacy report.

The results of this analysis may be seen below.

As can be seen, only President Obama and Number 10 Gov attract a sizeable following. The average world leader in my sample attracts a mere 4 of his peers out of a possible 32. As such, it seems that Twitter is not necessarily a medium for diplomatic signalling among world leaders.

Additionally, results suggest that we may have overestimated world leaders’ use of twitter as a diplomatic channel. It is possible that world leaders’ Twiplomacy is limited to three areas: public diplomacy, nation branding and domestic diplomacy (e.g., promotion of foreign policy among the national citizenry). This assumption, of course, warrants further investigation.