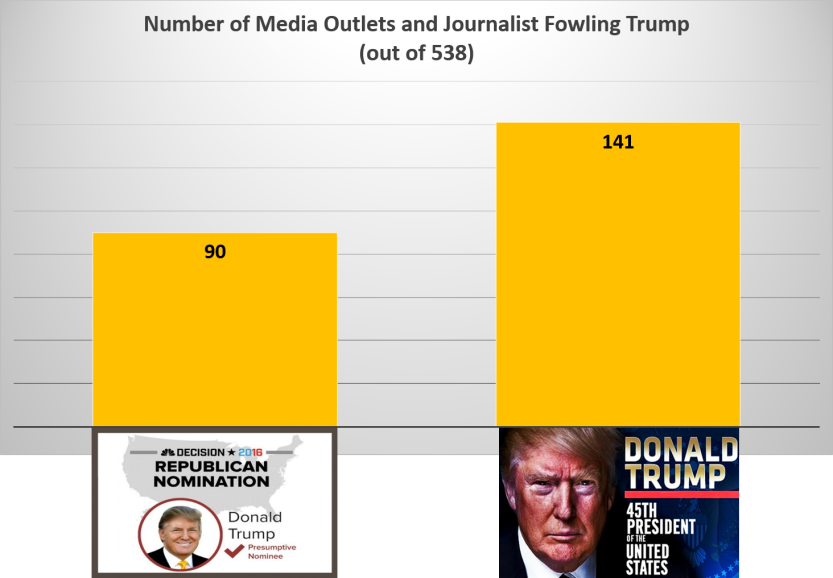 Several weeks before the 2016 US elections, I analysed the extent to which Presidential candidates attract digital diplomacy followers.  To do, I evaluated the number of Twitter followers Hillary Clinton and Donald Trump attracted from five epistemic communities: MFAs, UN missions in NY and Geneva, Multi-Lateral organizations and foreign affairs journalists.

My results showed that among all digital diplomacy communities, Hillary Clinton had more followers than Donald Trump. In fact, Trump was not followed by any UN missions in Geneva or Multi-Lateral organizations and was only able to attract a negligible amount of followers from NY missions and MFAs.

I had concluded that the large gap between Clinton and Trump could be a result of two factors. First, Clinton was a former Secretary of State and as such may have been of greater interest to digital diplomacy communities. Secondly, I postulated that diplomatic institutions had decided not follow Trump given fear of legitimizing the controversial candidate.

Now that the election is over, and Trump is officially the President-elect of the US, I decided to return to his Twitter profile and re-examine his ability to attract followers from digital diplomacy communities. I assumed that diplomats, and diplomatic institutions throughout the world would flock to Trump’s Twitter account so as to learn more about his future policies.

My first analysis compared the number of media outlets and foreign affairs journalist, commentators and editors that follow Trump on Twitter. As can be seen in the image below, when Trump was but a candidate for the Presidency he was followed by 90 journalist and media outlets out of a possible 538. Now, as President-elect, he is followed by 141 news outlets and diplomatic correspondents.

This analysis suggest that diplomatic/foreign affairs correspondents and editors view Trump’s account as a source of valuable information.

(Note: the sample of 538 journalists and outlets was first comprised in July 2016 and includes newspapers, news agencies, global new outlets and journalists throughout the entire world).

Next, I compared the number of MFAs following Trump on Twitter. The sample used in this analysis included 69 foreign ministries throughout the world (i.e., Europe, Latin America, Africa, Oceania and No. America).  As can be seen in the image below, the President-elect is now followed by 10 MFAs as opposed to 3 when he was a candidate. 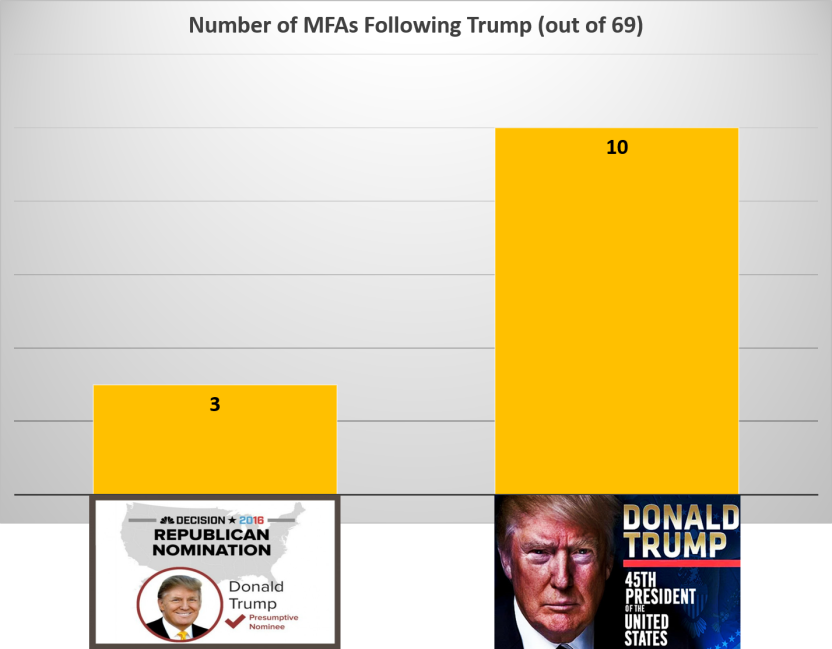 While this comparison suggests that Trump has been able to attract more MFAs than before, the overall number remains extremely low. Out of 69 MFAs that actively use Twitter on a daily basis, only 10 follow the US President-elect.

My next analysis compared the number of missions to the UN in NY and Geneva that follow Trump. As can be seen in the two images below, while President-elect Trump attracts more followers than candidate Trump, once again the overall number is quite low. 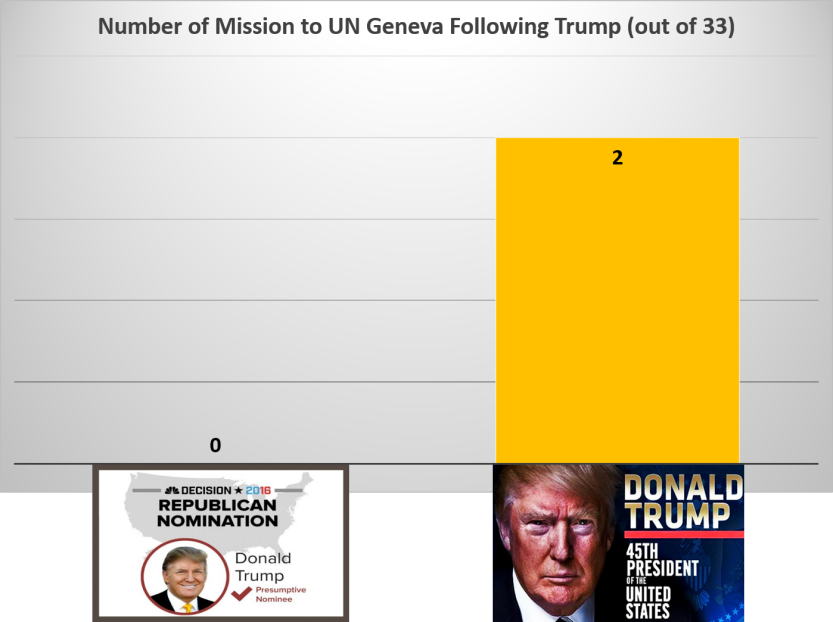 Of the 33 most active NY missions, only 4 follow the future President. In Geneva, the President-elect is able to attract only 2 missions out of a possible 33. Thus, as was the case with MFAs, few digital diplomats seem to be engaging with the President-elect on Twitter.

My final comparison analysed the number of Multi-Lateral organization that follow Trump on Twitter. My sample included 43 global organizations including the World Trade Organization, the World Health Organization, and the International Telecommunication Union. As can be seen in the image below, neither Candidate Trump nor President-elect Trump were able to amass a sizable following among this digital community. 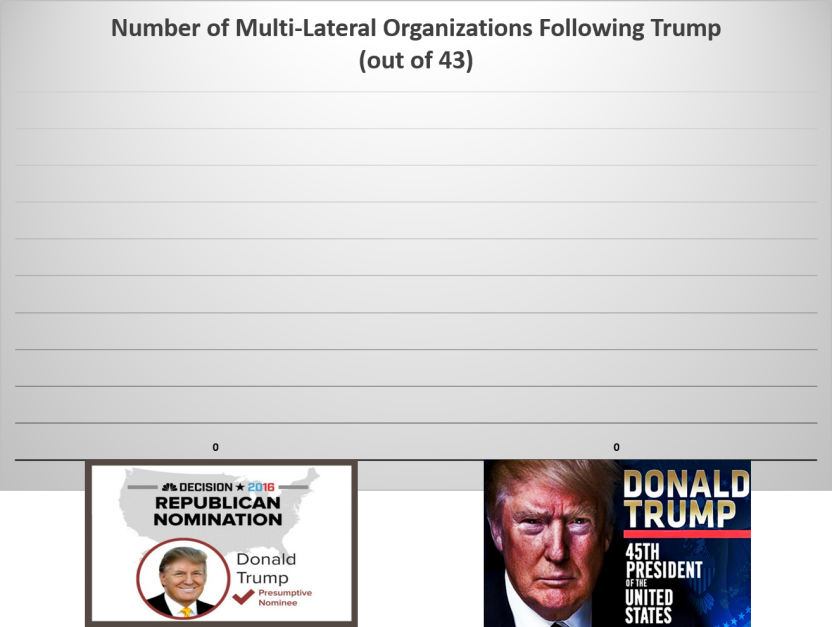 Thus far, my results are quite perplexing. How is it that so many diplomatic institutions refrain from following the next US President on Twitter? Especially given the fact that he is arguably one of the most important diplomatic figures in the world and a Twitterati?

One answer might be that diplomatic institutions do not follow the personal accounts of world leaders, but rather prefer to follow their institutional accounts (i.e., following @POTUS rather than @BarackObama).

My first analysis compared the number of MFAs Trump and Obama attract to their personal Twitter accounts. As can be seen in the image below, while only 10 MFAs follow President Trump, 40 foreign ministries follow President Obama. 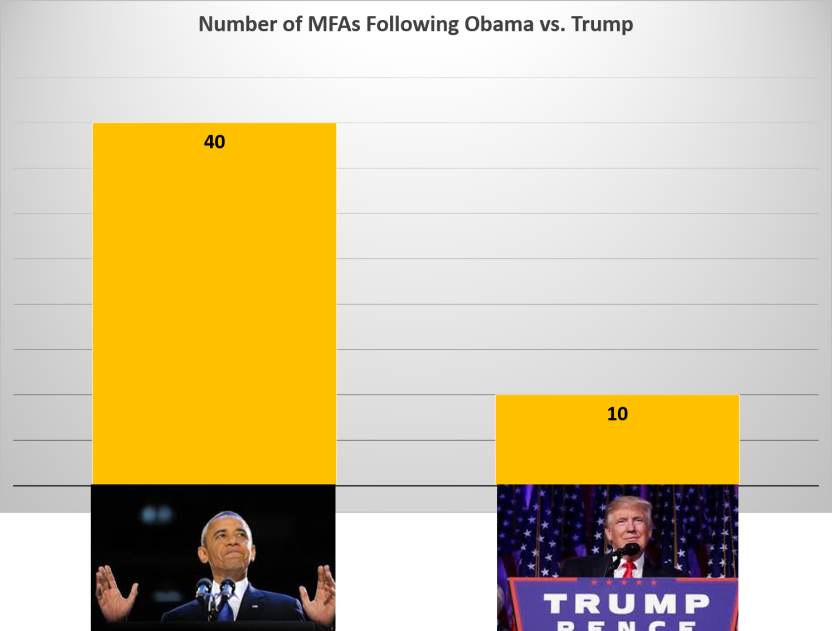 This sizable gap suggests that MFAs follow both the personal, and institutional accounts of world leaders.

Next, I compared the extent to which UN missions in NY and Geneva follow Obama and Trump. These comparisons can be seen in the images below.

As ca be seen in both UN forums President Obama attracts more missions to his personal account that President-elect Trump. The gap between the two is especially large in NY where Obama is followed by 15 missions and Trump by a mere 4.

The analysis comprising this blog post does not offer a definitive answer as to why so few diplomatic organizations currently follow Donald Trump on Twitter. It is quite possible that they will all follow him once he is sworn into office. Moreover, once he assumes the Presidency he will be the new bearer of the @POTUS Twitter account giving him access to more than 12 million followers, many of them diplomats and diplomatic institutions.

Yet if one were to view digital diplomacy as a tool for diplomatic signalling, he could also argue that the diplomatic community seems to be dyeing Trump diplomatic recognition. This may be a result of the anxiety and fears brought about by his election. Diplomats throughout the world are trying to make sense of Donald Trump and are finding it hard to come to terms with rhetoric, divisive policies and erratic plans for the future.

As such, the digital diplomatic community may be following Angela Merkel’s lead saying “we will work with Trump But only if he remains committed to our values and norms”.

If this is indeed the case, it would be interesting to see if diplomatic institutions will continue to follow the @POTUS Twitter account once Trump assumes office.