Despite recent debates on fake news and the virility of rumors and gossip, it is important to remember that social media users are intelligent, curious and eager to learn about events shaping their world. More specifically, digital diplomacy followers are often interested in insight and analysis of global events. For this reason, narratives may play an important role in digital diplomacy. Narratives offer a clear explanation of complex events. Moreover, narratives demonstrate how seemingly disconnected events relate to one another. Finally, narratives offer a frame through which the world makes sense.

Various MFAs integrate narratives into their digital diplomacy activities. For instance, the Israeli MFA often explains events in the Middle East through the narrative of Western values. According to this narrative, Israel is a bastion of Western values and democracy in a region populated by despots and religious fanatics. Within this narrative Israel is portrayed as the only democracy in the Middle East and the front of a global battle against extremism. According to this narrative, the recent attack on a Christmas market in Berlin is akin to a terrorist attack in Israel.

An interesting question is what role images play in digital diplomacy narratives.

On the use of images

Images are powerful tools. They can evoke strong emotions or memories. They can become an indispensable part of a nation’s history and they can replace thousands of words. But images are also ideological vehicles. Images are not neutral or accidental but are carefully selected tools used to relay a certain message or promote certain values and norms.

Therefore, images are important components of a narrative. Consider the image below, published by the Israeli IDF on Twitter. In this image, IDF soldiers are saving the life of a Syrian refugee who crossed the border into Israel. The image is part of the Western values narrative as it depicts the difference between the Israeli Army and Arab armies- while Arab armies butcher their citizens, the Israeli army saves citizens. 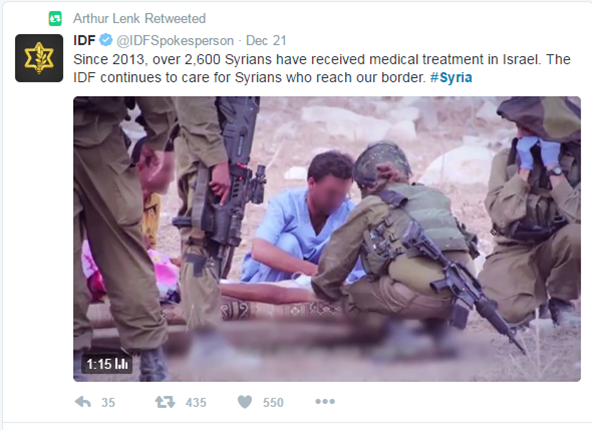 Notably, images are often used because they elicit associations with commonly familiar or iconic moments in history and cultural products. In its narrative of the events in Syria, the British FCO seems to rely on such images. These are explored in the following section.

On the use of images by the FCO

In recent days, the British FCO has been dedicating much of its social media activity to the bombardment of Aleppo. One such tweet, shown below, includes an image of the devastation now seen across Aleppo.

“Assad’s conquest of Aleppo will not mark the end of the war in Syria."

Notably, this image may immediately evoke iconic image from British history, those of a devastated London during the German Blitz. The image is thus an important component of the FCO’s narrative- the same brutality unleashed against the UK in World War 2 is now unleashed against the citizens of Syria.

An additional image used by the FCO, shown below, is that of countless bodies left on the ground in Aleppo. This image is quite similar to those published in the UK following the evacuation of British soldiers from Dunkirk. As such, this image evokes additional memories from World War 2 and adds another component to the FCO’s narrative- just as the UK opposed the tyrants of the 40’s so it will oppose today’s tyrants.

The FCO has also employed images of the UN when tweeting about the lack of action in the Security Council. According to the FCO, Russia has continuously used its veto right in order to prevent a resolution on the crisis in Aleppo. Notably, the FCO often uses an image of the Security Council roundtable as can be seen in the Tweet below.

This image elicits memories of another famous roundtable- that which appears in Stanly Kubrick’s masterpiece Dr. Strangelove.

The UN was supposed to be the antithesis to Kubrick’s roundtable of generals contemplating nuclear war. Indeed, the UN was supposed to be a forum where disagreements could be resolved by men of peace rather than men of war. By using this image, the FCO may be adding another element to its narrative- the UN can no longer cope with the atrocities in Syria as Russia is undermining its very mission.

Next, the FCO has also used the image seen below of bi-lateral meetings between US and UK officials.

This image of leaders and diplomats meeting opposite a long table is itself a play on similar iconic images of peacemaking moments in history.

The long table image can be understood as another part of the British narrative according to which the UK and it historic allies are operating outside the confines of the UN in order to alleviate the suffering of people trapped in Syria. In fact, this suffering was depicted in another Tweet shown below. While the image used in this Tweet, that of a child waiting in line for food, originated from the Guardian newspaper the FCO still used it in its tweet.

The image of a child waiting for food may be interpreted through the prism of culturally significant products. In British culture, the image of a suffering and hungry child waiting in line for food is reminiscent of Oliver Twist asking “Please sir, can I have some more”. And so the Syrian reality becomes akin to a Dickensian reality.

The association with Oliver Twist may have been part of an attempt to make the suffering in Syria relatable to UK social media users. Conversely, it may have also been used to demonstrate that helping the poor and the suffering is a core component of British culture.

Finally, the UK FCO also tweeted the image below depicting a child raising three fingers bearing the colors of the Syrian flag. This image relates to another iconic British moment- that of Winston Churchill using the V for victory sign during World War 2.

The British narrative of events in Syria

Taken together, the images explored in this post suggest that the British narrative of events in Syria is that of “Once more unto the breach dear friends”. The horrors in Syria, and in Aleppo, are akin to the devastation of World War 2.  Russia has transformed the UN from a peace forum to a war forum, another instrument through which it can perpetuate its aid to the brutal Bashar Assad. And so, once again, it falls on Britain and its allies to alleviate the suffering of those trapped in Syria. Yet such aid to the suffering is part of the British DNA and just as Britain vanquished the tyrants of the 40’s so it will vanquish the tyrants of today.

Interested in the use of images and narratives in digital diplomacy? Join our workshop to be held on January 20th at the University of Oxford. More info here