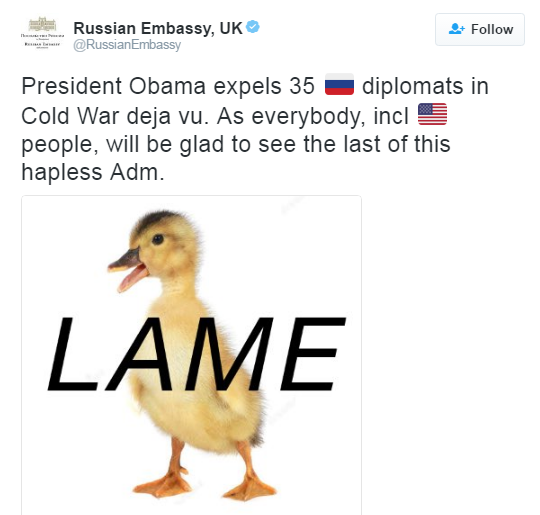 On Thursday, the 29th of December 2016, President Barack Obama announced the expulsion of 35 Russian diplomats from the US as well as new economic sanctions targeting Russia’s intelligence agencies. Both measures were part of the American response to Russia’s alleged interfering in the 2016 Presidential elections.

Russia’s digital response was immediate. Within an hour of Obama’s announcement Russian diplomats and diplomatic institutions took to Twitter in order to condemn the US President.  The Russian embassy in London published the Tweet seen below labeling the President a lame duck.

President Obama expels 35 🇷🇺 diplomats in Cold War deja vu. As everybody, incl 🇺🇸 people, will be glad to see the last of this hapless Adm. pic.twitter.com/mleqA16H8D

This message soon became a Tweet heard around the world. Newspaper articles detailing Russia’s response to the new sanctions included the embassy’s Tweet and its harsh rebuke of the American President. Additionally, the Tweet soon became a topic of discussion among journalists, diplomats and academics all interested in the application of digital diplomacy.

One senior academic who commented on the Tweet wrote “diplomacy in 2016” while others wrote “Twitter and Diplomacy. Debate” and “digital diplomacy win”. British academics took a harsher tone writing “Yes. This is the real, official Embassy account #foreal” and “Weaponize the ducklings. #hybridwar“.

A journalist from the Washington Post wrote “If ‘The Americans’ were set in 2016, I suspect it would involve a lot of message board and meme-related subplots” while a reporter from the Wall Street Journal Tweeted “The Russian embassy Twitter account seems to be run by pre-adolescents”. The BBC website dedicated an entire article to Russia’s Twitter response stating “diplomatic spat goes undiplomatic”.

An employee of a global NGO chose to berate the Russian Embassy tweeting “In related news, @RussianEmbassy Tweets picture of a duck in response to sanctions. Modern diplomacy everyone”. Other diplomats took a similar tone writing “Fine professional diplomats at work here” and “God bless the noble art of diplomacy”.

Finally, even branding and social media strategists commented on the Embassy’s Tweet. One commented “loooool, who on earth runs the Russian Twitter?” while another stated that “Teenagers are running the Russian embassy’s Twitter. Wait, actually teenagers would have edited a better image”.

The comments listed above seem to express three sentiments. The first is that the Russian Embassy’s Tweet was undignified. Long gone are the days of eloquent rebuttals and double entendres as diplomacy has now been reduced to offensive bickering. The second sentiment is that Russia’s response was childish. Instead of offering a counter argument, Russian diplomats have settled for name calling. The final sentiment is that social media and images have, for better or worse, become an indispensable part of modern diplomacy.

In this blog post I attempt to analyze the Russian Embassy’s Tweet and evaluate whether it was really an undignified and childish response or a text book application of digital diplomacy.

While some have argued that the lame duck Tweet was vulgar, and even childish, the image used in this Tweet is actually quite sophisticated.

At first the viewer is drawn to the word “Lame” written in block capitals. In addition to suggesting that Obama, or his administration, are lame this wording is also simple and unsophisticated. As such, it suggests that Russian diplomacy is clear-spoken and understandable to the common man. Unlike other nations Russia does not hide behind long and dreary diplomatic statements- it speaks its mind, and it speaks the truth. Taken within a wider context the “Lame” phrase can be understood as echoing the anti-intellectual sentiments of Brexit, Trumpism and right wing politics. The world has enough of experts and eloquent politicians; it wants frank and bold nations who are not afraid of being abrasive.

Next, the viewer is drawn to the image of the duck. It is at this point that the double entendre of the image becomes clear- Obama is not just lame, he is a lame duck. This Tweet therefore suggests that Obama’s recent actions are as irrelevant as the President himself. It is this added meaning that places Obama in a specific context- that of the world of yesterday. The lame duck Tweet therefore offers a narrative through which a social media user can interpret both Obama’s actions and Russia’s role in the world- Obama belongs to the irrelevant past while Russia belongs to the relevant future.

An additional interpretation may focus on the use of the image of a duck. Within popular Western culture images of ducklings often evoke references to the “Ugly Duckling”, a story written by Hans Christian Anderson. Analyzed within this prism Obama is likened to a brown duckling thus referencing the President’s race. Notice that the duck in the image also has a streak of black hair on his head, again referencing the President’s race.

But even more importantly, unlike Anderson’s duckling President Obama has failed to develop into a beautiful white Swan as is evident from his “lame” swansong- the irrelevant explosion of 35 Russian diplomats.

By echoing the sentiments of Brexit and Trumpism (be it racial tensions or anti-intellectualism), and offering a narrative of Obama and Russia, the Embassy’s image emerges as anything but childish or adolescent. It is an ideological vehicle comprised of two layers- one which is understandable to all social media users and another which is understandable to more sophisticated ones.

Finally, the viewer is drawn to the text that accompanies the image. Here the Embassy uses a short message to ensure that social media users understand both the image and its underlying ideology. Obama’s actions are described as reminiscent of the Cold War, of the past. Yet today Russians and Americans are closer and see the world in the same way. Thus, again, Obama is depicted as a relic of an outdated past. And what is it that Russians and Americans agree about? What is it that draws them together? Obama’s lack of aptitude.

Within hours of the Tweet’s publication, it became the subject of numerous newspaper articles. Importantly for the Russian Embassy, most British newspapers and news outlets highlighted the Tweet in their reporting of Obama’s sanctions. These included the BBC, the Sun, Metro, the Independent and the Telegraph. Thus, vast segments of the British public were exposed to the Embassy’s rebuke of Obama and its narrative of events. This included internet users that are not on social media or Twitter.

Next, the Tweet made headlines in the United States and was reported on by NPR, CNN, CNET, NPR, the New York Post, CBS news and even Mashable and BuzzFeed.

The Tweet even made headlines in India, Australia, Jamaica and Israel. 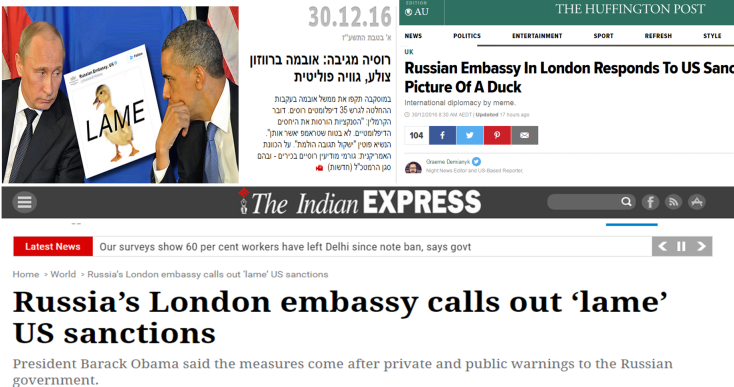 On Twitter itself, the Tweet soon went viral and garnered more than 17,000 re-tweets and 19,000 likes. By comparison, the average Tweet published by the Russian Embassy in the month of December garnered only 55 re-tweets and 72 likes. The virility of the Tweet suggests that it soon made its way to a global public sphere and, by so doing, carried Russia’s narrative far and wide. However, this does not guarantee that all social media users agreed with Russia’s rebuke of Obama as many added sarcastic comments.

In summary, the Embassy’s Tweet was quite effective in terms of potential reach and exposure. It can be estimated that this single Tweet reached millions of individuals alongside diplomats, policy makers, journalists and academics.  Moreover, as the previous section suggests it did not just reach individuals but also attempted to influence their interpretation of world events.  As such, some might argue that the lame duck Tweet meets the most basic goals of digital diplomacy.

Of course many social media users found the Russian Tweet to be crude, vulgar and entirely undiplomatic. This was also the case with many journalists and new sites.

On the other hand, it can also be argued that this Tweet is emblematic of social media rhetoric in general.  Contemporary social media content is divisive, inflammatory and polarizing. It employs slurs, rumors and exaggerations and is increasingly violent. This is also true of politics in general and is evident in the rise of reactionary politicians and policies across the world. One might therefore claim that the Russian Tweet demonstrates that diplomacy is a social institution comprised of social beings.

As society changes so does diplomacy.

This change is quite evident in Russian digital diplomacy. Consider the Tweet below published on December 30th, 2016, by the Russian Embassy to London, a Tweet which may also be construed as “on the offensive”.

No UK reaction to historic Russia-Turkey-Iran brokered all-Syria truce. Why?

Taken together with the Twitter habits of the Russian MFA spokeswoman, Maria  Zakharova, Russian digital diplomacy seems to have adopted a new social media strategy, one that does not mince words.

2 thoughts on “The Russian Tweet Heard Around the World”