During the 2016 Presidential elections, Donald Trump argued that he relied on his Twitter account to bypass the liberal American media and communicate directly with the American public. Having been denied access to the public sphere by newsroom elites, “the Donald” used social media win over the American electorate. Some have asserted that Trump uses his Twitter account in a tactical way. By publishing outlandish content, by spreading rumours and half-truths and by attacking other prominent public figures, Trump is able to increase his digital reach and amass more followers. Others have argued that Trump uses his Twitter account in a strategic manner. His goal is not to amass new followers, but to “hijack” the media’s agenda.

The appearance of 24-hour news channels in the 1990’s led communication scholars to identify the “CNN Effect”. Studies suggested that issues which were prominent in CNN’s world coverage soon rose to prominence in American public opinion. This forced American administrations and diplomats to formulate corresponding foreign policies. For instance, the American humanitarian interventions in Africa to end hunger were traced to CNN’s extensive coverage of the famine in East Africa. By setting the public’s agenda, CNN also set the President’s agenda. Donald Trump has created a “Reverse CNN Effect”. By using abrasive language, by attacking his peers and colleagues and by spreading false information, Trump is able to set the media’s agenda while at the same time achieving domestic and foreign goals. Trump thus mesmerises the media through his Tweets and channels its attention.

Of course the media are not the only ones to respond to Trump’s Tweets. Digital publics from all over the world comment on the President’s Tweets, as do diplomats and world leaders. When Trump argued that Sweden had suffered a horrid terrorist attack, the Swedish embassy to the U.S. immediately responded stating that no such attack had occurred. When Trump argued that France suffered terror attacks as its citizens could not bear arms, the French Ambassador to Washington called the President a vulture. When Trump labelled Mexican immigrants as criminals, the former Mexican President responded with a series of YouTube videos. Even this week, U.K. Prime Minister Theresa May called Trump’s attacks on congresswomen “unacceptable”.

Although he still uses Twitter on a daily basis, the President has suggested that his Tweets are no longer as popular as they once were. Trump has suggested that this is a result of social media manipulation. Yet another possible answer lies in the concept of digital attrition. It is possible that the general public, the media and diplomats have become accustomed to Trump’s Tweets. Having been bombarded by Trump over the past four years, these publics have endured a digital war of attrition. Bruised and battered, they have steadily grown accustomed to Trump’s attacks and no longer pay them the same level of attention. While certain Tweets still evoke mass attention and condemnation, Trump has to continuously “outdo” himself if he is to retain public attention.

For Trump, Twitter has been an indispensable tool at the national and international level. Digital attrition could prevent him from using Twitter to set the global media and public agenda. In this post, I analyzed the possibility of digital attrition by evaluating the engagement levels that Trumps’ foreign policy Tweets garnered in three time periods- January to April 2017, January to April 2018 and January to April 2019. In total, my sample included 150 Tweets that dealt with foreign policy issues ranging from North Korea’s nuclear capabilities to trade wars with China. The results are shown below.

In the first stage of the analysis, I grouped Trump’s foreign policy Tweets into thematic categories. For instance, Tweets dealing with the struggle against ISIS were grouped under the “Terrorism” category while Tweets dealing with trade wars were grouped under the “Trade” category. It is interesting to note that between 2017 and 2019 Trump’s foreign policy Tweets dealt with the same issues: Russia, the Iran Deal, relations with North Korea, Borders and Immigration, Meeting World Leaders and Terrorism. Yet the prevalence of each category varied from year to year as may be seen in the three graphs below. 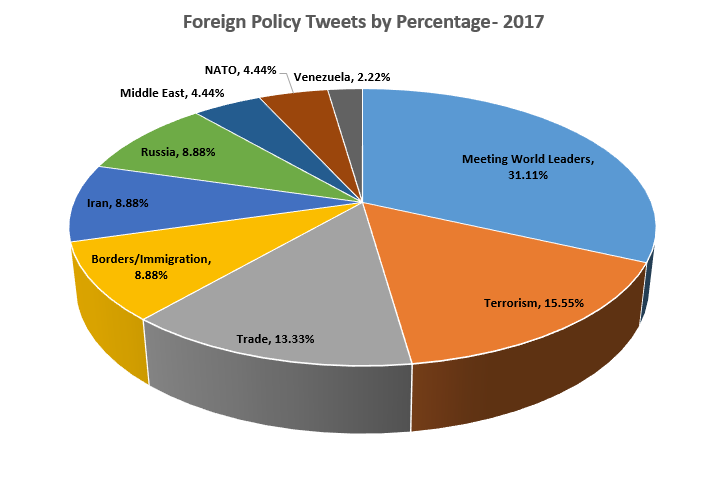 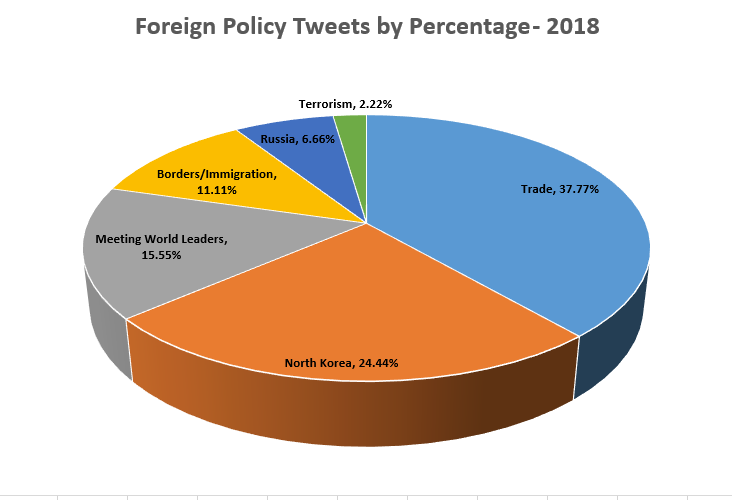 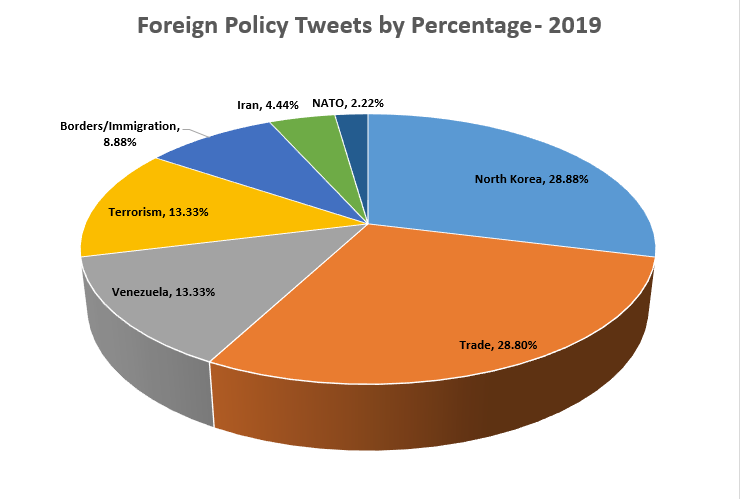 The three graphs above demonstrate that Trump uses Twitter to comment on foreign policy issues and events as they occur. For instance, between 2017 and 2018 there was a growth in the prevalence of the Trade category given that the President had launched a trade war with China. There was also a decrease in terror related Tweets as the menace of ISIS subsided. Between 2018 and 2019 the North Korea category grew in prevalence as the President met with North Korea’s leader and promised to de-nuclearize the Korean peninsula. The Venezuela category also grew in prevalence given the financial and security crisis in the country.

Next, I calculated the average engagement rates that Trump’s foreign policy Tweets elicited in each year. The results may be seen in the graph below. 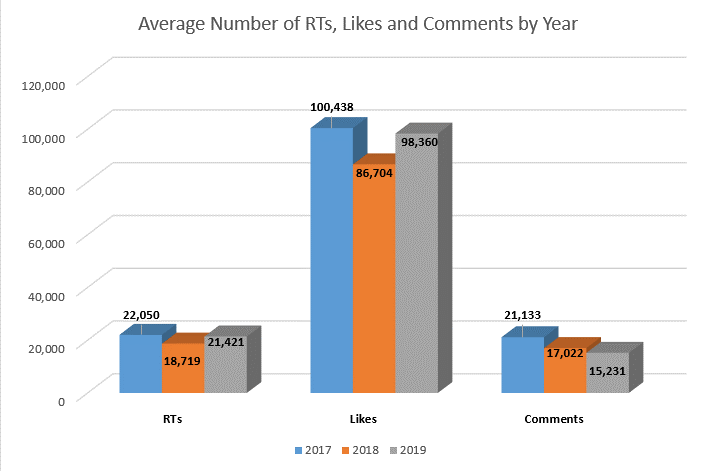 As can be seen in Graph 4, in all engagement parameters (Re-Tweets, Likes, Comments) Trump Tweet suffered a significant decline between 2017 and 2018. While in 2017 the average foreign policy Tweet garnered 22,050 re-tweets, in 2018 it garnered 18,719 re-tweets. Similarly, the number of Likes declined from 100,438 in 2017 to a mere 86,704 in 2018. Most importantly, the average number of comments declined from 21,133 to 17,022. In 2019, Trump’s Tweets fared somewhat better. However, this may be attributed to the fact that this is an election year and as such Presidential Tweets gain more attention. Yet the President’s Tweets in 2019 still garnered lower engagement when compared with in 2017. Notably, the average number of comments posted in response to Trump’s Tweets declined in 2019 to a record low of 15,231.

One could argue that comments are the most important form of engagement as they suggest that digital content was able to elicit responses from social media users. Whether positive or negative, the content in question moved the user to such a degree that he was willing to dedicate time and resources to responding to a Tweet. The steep decline in the number of comment that Trump’s Tweets elicit may be indicative of digital attrition- people have grown weary of his content and no longer feel the need or desire to respond to his outlandish statements.

In the next stage of the analysis, I examined the engagement rates of specific categories. One of the issues that Trump often Tweets about is trade. Over the past three years, the President has repeatedly blasted foreign countries and leaders for mistreating the U.S. and using tariffs to strangle the American economy. However, as the graph below demonstrates, engagement rates with Trade Tweets has dramatically declined between 2018 and 2019. 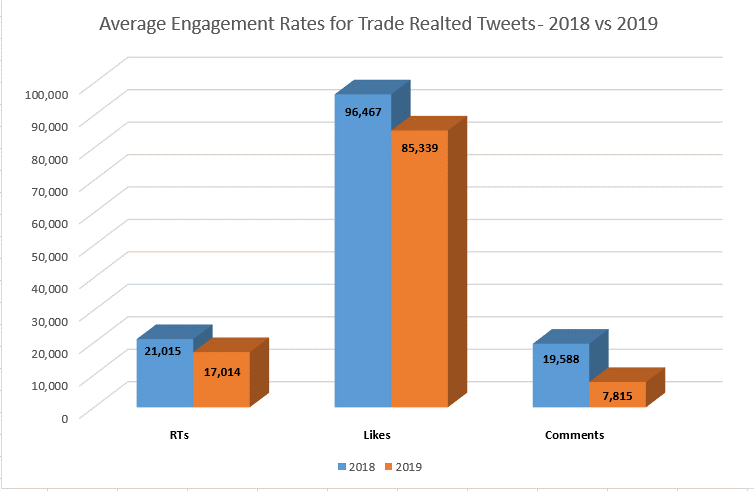 The same is true of terrorism related Tweets. As the graph below indicates, Trump’s attacks on European nations and their lax gun control or immigration measures no longer resonate with Twitter users or evoke the same number of Likes, re-tweets or comments. 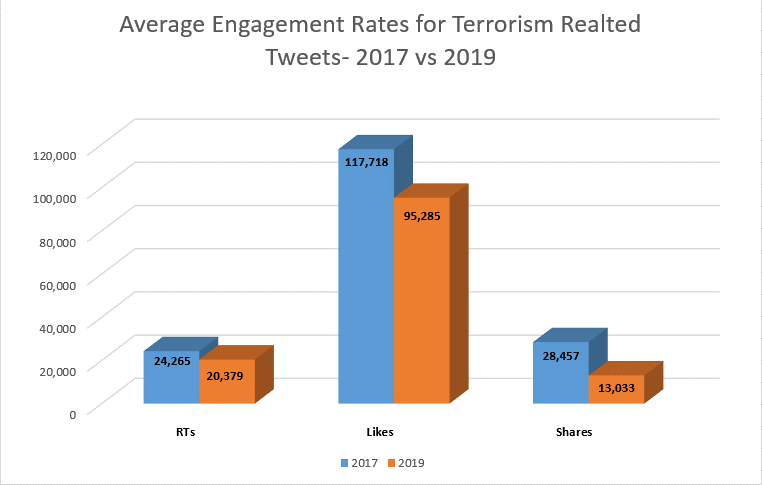 When it comes to the issue of borders and immigration, engagement levels with Trump’s Tweets vary from year to year. After a steep decline between 2017 and 2018, the President’s engagement levels have improved in 2019. Yet this again may be attributed to the fact that this is an election year in which the President will highlight the issue of American borders. Moreover, the detention of immigrants in ICE facilities is a major issue in global public discourse. 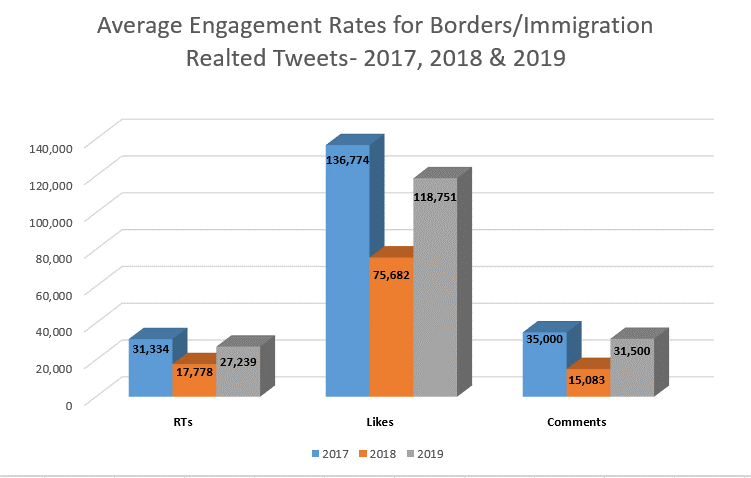 Lastly, my analysis focused on Russia related Tweets. Given that the analysis focused on foreign policy issues, it did not include Tweets dealing with the Muller probe into Russian meddling in the 2016 elections. Rather, it focused on issues such as the future of US-Russian relations, the crisis in Ukraine and President Putin’s personal relationship with Trump. As can be seen in the graph below, between 2017 and 2018 engagement levels with Russia related Tweets declined, with the exception of the number of comments. 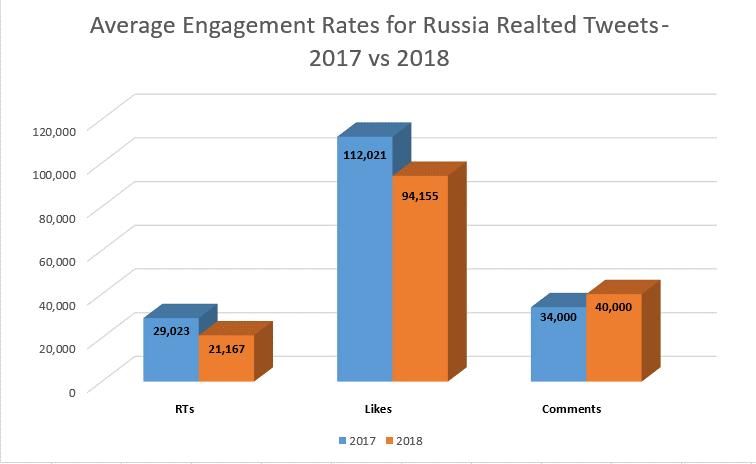 This post attempted to analyze whether engagement levels with Trump’s foreign policy Tweets have declined over time. It assumed that digital publics, newsroom elites and diplomats have all grown accustomed to Trump’s use of Twitter and his attempts to hijack the national and global agenda. As Trump has spent the past four years bombarding publics with profanities, lies and attacks on public figures, it was assumed that social media user now suffer from digital attrition. User no longer pay the same level of attention to Trump’s Tweets as they once did. The results of the limited analysis presented in this post suggests that Trump has lost his magic touch. In general, engagement levels with his foreign policy Tweets have declined substantially over the past three years. Specific issues that are close to Trump’s heart, such as trade and terrorism, no longer elicit the same high levels of public interaction.

On the bright side, digital attrition could suggest that digital publics and the media no longer fall prey to Trump’s Tweets and will not easily be mesmerised by his online antics. This will make it harder for the President to set the global agenda or bewilder the media long enough to obtain policy goals. On the other hand, in an attempt to regain public attention, Trump may steep even lower adopting a combative tone that will further degrade public and media discourse in the U.S. and around the world.