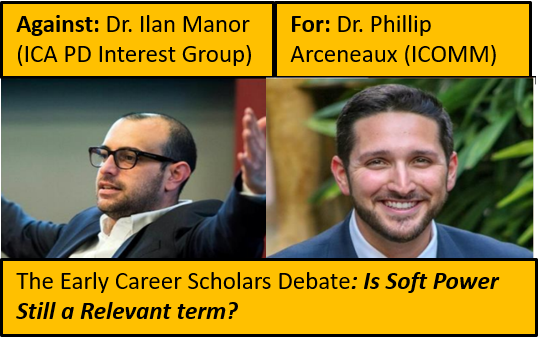 NOTE: On March 30, 2021 the International Communication Section of ISA, and the ICA’s Public Diplomacy Interest Group held a joint debate on the merits of the term Soft Power. I was asked to argue against the proposition. Below are my comments, which should be regarded as both an assessment of the term Soft Power, and an attempt to win the the debate. The entire debate may be viewed at:

Allan Ginsburg opens his masterpiece Howell with the words

I saw the best minds of my generation destroyed by madness, starving hysterical naked,

As a public diplomacy scholar,

I saw the best minds of my generation destroyed by madness, starving hysterical for a metaphor,

As I will argue in this debate, Joseph’s Nye concept of Soft Power has lost its relevance, if it ever had any.

I will however, in the name of decency, begin by paying Uncle Joe a compliment- that his concept offered scholars a clear metaphor through which power could be conceptualized. Like Benedict Anderson’s Imagined Communities, Soft Power made sense. Countries could alter the behavior of other states through co-optive or Soft Power, and through coercive or Hard Power.

This clear dichotomy is representative of the blasé attitude of the 1990’s in which Nye formulated his concept. The Soviet Union had collapsed; the world of mutually assured destruction (MAD) would be replaced by a democratized world in which America’s leadership would go unchallenged. But, Nye argued that acting like a hegemon could actually be counter-productive to US power. Rather, the US should embrace Soft Power as its main foreign policy tool. Multilateralism would be the order of the day. Through Soft Power institutions such as the WTO, America could make the world American, and spread its ideals, norms, hopes and dreams far and wide.

Yet Nye’s greatest sin is that he masked the true nature of power. For be it Soft or Hard- power is power, power is changing the behavior of another. Power is forcing one’s norms and ideals on another. Nye sugar coated power and sought to obfuscate American hegemony. The term Soft power glazed power with sugar, like a Duncan Donut. Indeed, sugar sprinkled power is more palatable. But it is power none the less.

And what of the nations that embraced American Soft power and the WTO? They saw the true nature of American power during the 2008 financial crisis. For what did America do in face of crisis? How did it hold true to its ideals? Simple. It betrayed them. When American greed went bankrupt, America turned to socialism. Mass government bailouts, the purchasing of collapsing banks and inflating markets with sugar printed dollars. And what of the 50% unemployed in Spain? What of the young and educated Irish that saw their country’s GDP dwindle like the autumn leaves? Did they get bailed out? No. They were left to their own devices.

In other words, Nye’s concept has sent many a’ scholars down the looking glass hoping to grasp what is, and what is not Soft Power. Nye himself has done so. In his most recent publication from 2021 Nye tries, yet again, to clarify the relationship between Soft and Hard power arguing that once it has been weaponized, Soft power becomes Hard power. Like in Holy Communion when the bread morphs into the body of Christ, so our prophet of latter day confusion argues for a metamorphosis of Soft to Hard Power.

To summarize, Soft Power is a public diplomacy tool, a result of public diplomacy activities, it is distinct, reliant and reinforced by Hard Power and let us not even turn to the new gospels of Smart and Sharp power lest we completely lose our bearings. And yes I invoke a religious term as Soft Power has become dogma- and to oppose it near heresy.

Perhaps most confusing is the fact that we already had terms that captured the essence of Soft Power. Prestige for one. As Harold Nicolson argued, the image of a nation, shaped by its historical greatness, can help it advance policy goals. And what of Peter Van Ham’s concept of Social Power? Both argue that nations which are seen as transgressing on accepted values will experience opposition to their policies, especially the use of force. So where is the added benefit of Soft Power?

I’ll give you a hint, yee faithful- there is none.

And what of the world? Is it really shaped by Soft Power? No. It is shaped by Hard Power.

More than any President, Barack Obama was the Soft Power President. As one scholar wrote in Foreign Policy- all routes to understanding the Obama White House pass through Joseph Nye. Yet the Iran Deal did not come about because the Ayatollah’s wanted to host a Taylor Swift concert but because of crippling financial sanctions that threated the regime. To defeat ISIS Obama bombed the Middle East, to contend with Crimea he used financial sanctions. The only thing Soft thing about Obama was that the Drones he so loved were operated from caravans in Las Vegas instead of NORAD.

Though ultimately booted out of office, Tony Blaire remains an astute student of international affairs. He contends that the 21st century will be governed by three giants- the US and China, thanks to military and financial prowess, and India given its status as the world’s telecommunications hub.

In this world, no single nation will be able to alter the behavior of giants, or successfully negotiate opposite them. Thus, nations will enter short-term strategic alliances based on interests not values. Israel’s recent accord with the UAE stemmed not from Soft Power, shared values or even shared systems of government but out of a shared interest to stem the power of Iran.

Notably, Nye’s world of Soft Power never came about. Democratization has eroded, unilateralism as marked by Brexit has supplanted the paralyzed multilateral system, one unable to end the wars in Syria, Yemen and Ukraine.  And while military power may still be uni-polar in the hands of America, financial power is already multi-polar.

The leaders of the Giants- Putin, Xi Moodi- none really believe in Soft Power. None believe in ideals over tanks but rather in tanks over ideals. Obama promised the world a new Middle East, Putin bombed his way to its center. The results speak for themselves. Russia is now a powerful broker in the region, while America remains bereft of respect and love.

But fear not. For the end of the world is not nye. Only the end of Soft Power’s reign as a leading prism in diplomacy is nye.