Throughout my exploration of digital diplomacy, I have found time and again that smaller nations can use social media in order to leverage their diplomatic standing. I refer to this phenomenon as social media mobility. This week I was interested in examining if Palestine is using social media to increase its visibility, promote its foreign policy among other diplomatic actors and frame its actions in the global arena. Thus, I decided to evaluate the state of Palestinian digital diplomacy.

It should be noted that this analysis was limited to official accounts of the Palestinian Authority and did not include accounts operated by the Hamas movements who rules over the Gaza Strip.

As can be seen in graph, the Palestinian embassy to the US attracts only 2,400 followers on twitter which is substantially lower than most other embassies in this sample. Thus, it seems that in the US the Palestinian embassy does not exhibit social media mobility. Notably, Israel’s embassy attracts the largest number of followers of all embassies evaluated. This suggests that Israel may be in a better position to promote its framing of events in the region.

Next, I evaluated the number of twitter followers that embassies to Germany are able to attract.  This evaluation can be seen in the graph below. 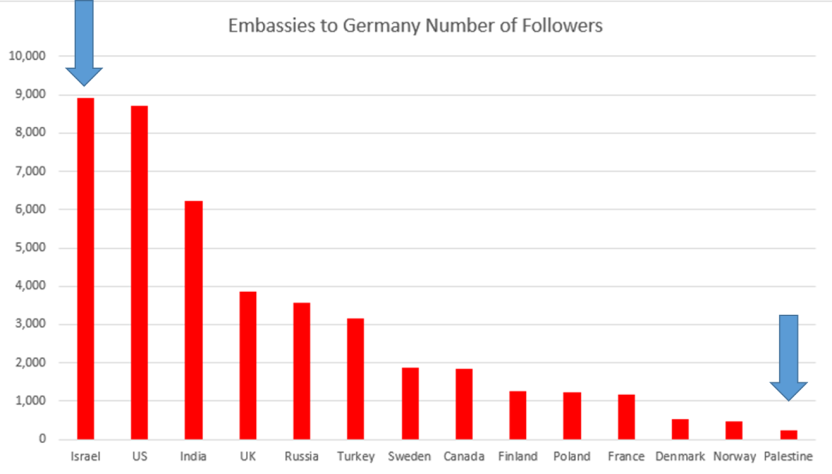 Here again, the Palestinian embassy fails to exhibit social media mobility and is ranked last out of 14 embassies comprising the sample. Moreover, as was the case in the US, the Israeli embassy attracts the most followers of all embassies in the sample. This suggests that Palestinian diplomacy may be ill-equipped to compete online with Israel’s narrative.

Finally, I examined the number of twitter followers that embassies to the UN in New York are able to attract. Here the results were quite different, as can be seen in the graph below.

Out of 18 missions to the UN, Palestine ranked 6th coming ahead of Norway, Sweden, Israel, Russia and Canada. There is also a sizable gap between the Palestinian mission and the Israeli one which ranked 10th.  It is therefore possible that within the UN, Palestine is able to use social media to leverage its diplomatic standing and counter Israeli narratives.

In order to conduct this analysis I used a sample of 69 foreign ministries, 570 news organizations (both global such as CNN and local such as The Guardian) and 40 UN related multi-lateral organizations. This analysis is shown below. 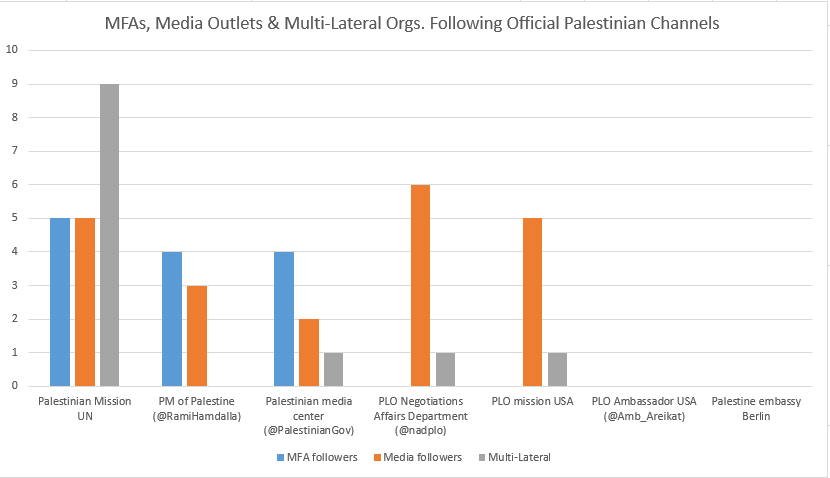 As can be seen, the Israeli PM attracts far more MFAs and news organizations than the Palestinian PM.

Finally, I compared between the official Palestinian Media Center, PLO Negotiations Affairs Department and the Israeli MFA. While these Palestinian bodies may not be exact counterparts to the Israeli MFA, both should attract diplomatic instiutions and news organizations given their position as official sources of information.

Much of Palestinian digital diplomacy may be characterized as peer-to-peer diplomacy and networked diplomacy in which groups of activists throughout the world promote the cause of Palestinian independence online. This analysis attempted to focus on official Palestinian channels that are operated by the Palestinian government.

Results suggest that there are few official channels and that such channels fail to attract twitter followers, MFAs, news organizations and UN related multi-lateral organizations. The comparison with Israel suggests that Palestinian diplomacy may be ill-equipped to compete with Israel’s online framing of events and narratives. Within the UN hub, however, Palestinian diplomacy may eclipse Israel’s online efforts. As such, it appears that the Palestinian government has yet to realize the potential of digital diplomacy in shaping the global discourse, framing government action and communicating with diplomatic establishments.