NOTE: This blog post originally appeared on the USC CPD Blog and was co-written with Professor Marcus Holmes

In 2011, the U.S. State Department launched Virtual Embassy Iran, a web-based platform that aimed to promote American “values and culture” to Iranians. This embassy served as an example of how diplomats can use digital technologies to overcome the limitations of traditional diplomacy. Although the U.S. and Iran had no official diplomatic ties, the State Department was able to use the virtual embassy to narrate American foreign policy, promote a positive image of America amongst Iranians, and converse with Iranian citizens through dialogic communication.

Recently and similarly, the Palestinian government in the West Bank established its own virtual channel for communicating with Israeli citizens in the form of a Facebook profile called “Palestine in Hebrew.” The page, launched in December of 2015, is operated by the PLO’s Committee for Interaction with Israeli Society and represents an innovative approach to Palestinian public diplomacy. Given that Israel and Palestine only partially recognize one another, and as there is no official Palestinian embassy in Israel, this Facebook profile is one of the only channels for direct communication between the Palestinian government and Israeli citizens, and the only digital one of which we are aware.

In order to understand how the Palestinian government utilizes this public diplomacy channel, we looked at all public Facebook posts published between January and April of 2017. First, we categorized all posts based on their subject matter. As the table below illustrates, the majority of posts focused on representing Palestinian values. This included posts recognizing the importance of women in Palestinian society, posts featuring Palestinian culture (e.g., theater, orchestra), the Palestinian government’s openness to criticism and the virtue of non-violent resistance. 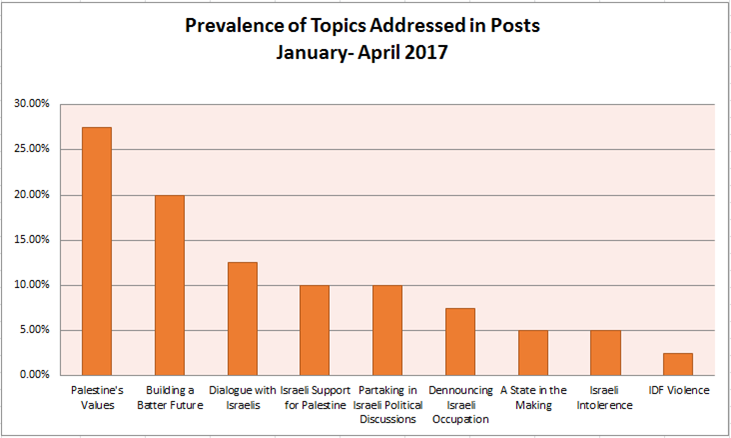 The second most prevalent category consisted of posts emphasizing the need to build a better future for both Israelis and Palestinians. One notable example was a post wishing Israelis a happy Passover and hoping that in 2018 both Israelis and Palestinians may be a free people living peacefully next to one another. This paralleled other holiday wishes conveyed online, such as Barack Obama’s Nowruz addresses to the Iranians. The third most prevalent category consisted of posts demonstrating the Palestinian government’s desire for dialogue with Israelis, such as posts depicting meetings between the Palestinian President and Israeli university students. Likewise, another category included posts in which Israeli officials expressed support for Palestinian statehood, whether these were former diplomats or members of the Israeli intelligence community.

Notably, the least prevalent categories dealt with Israeli actions towards Palestinians, denouncing the Israeli occupation, and violent altercations with the Israeli Defense Forces. Thus, it appears that this Facebook profile focuses on depicting the positive attributes of Palestine, and demonstrating a desire for dialogue, rather than accusing Israel of maintaining an occupation. This decision may be understood through the prism of public diplomacy as an attempt by Palestine to narrate a positive self-image among Israelis and foster understanding between both sides as a prelude to any future negotiations. Additionally, there were few mentions of the viability of an independent Palestinian state. Only one post focused on the Palestinian economy and a single post in this time period called for international recognition of Palestine.

In order to assess how dialogical the communication is, we analyzed the extent to which Israeli Facebook users engage with Palestinian Facebook posts. As can be seen in the following table, Palestinian posts received an average of 45 likes and 4 shares. This could suggest that Israelis were willing to share Palestinian content with their Facebook friends, thus extending the profile’s online reach. Even more importantly, the average post received 14 comments from Israelis. However, our analysis suggests that many of these comments were highly negative and included racial slurs and verbal abuse. 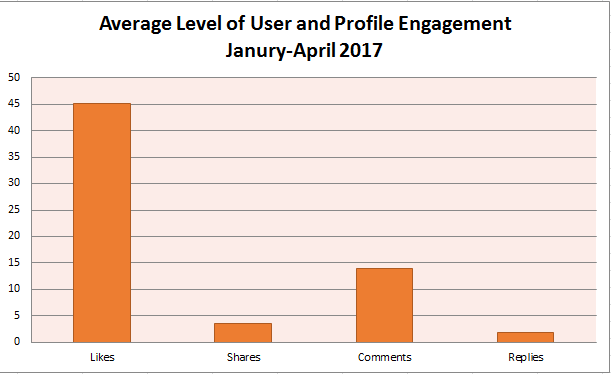 Given that the public diplomacy potential of social media lies in its ability to foster two-way dialogical conversations between nations and foreign populations, we analyzed the Palestinian response rate to Israelis’ Facebook comments more closely. As can be seen in the table below, the number of Palestinian replies reduced dramatically between January and April of 2017 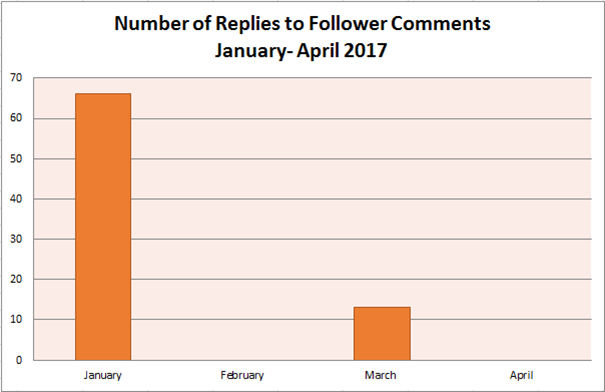 Any peaceful resolution of the Israeli-Palestinian conflict will require dialogue, mutual trust, and understanding between Israelis and Palestinians. The “Palestine in Hebrew” Facebook channel demonstrates that the Palestinian government in the West Bank is attempting to foster such dialogue and understating with Israeli citizens. While the profile is but one element in a larger Palestinian outreach initiative, it exemplifies how digital tools, and social media, can be used by governments to overcome the limitations of traditional diplomacy and practice public diplomacy. These results are important because they add to recent findings on digital public diplomacy that suggest that governments rarely embrace the conversational nature of social media.

However, it should be noted that, at least in our limited sample of posts, the Palestinian channel does not engage with the most divisive issues that Israelis consistently rank as most crucial in any future negotiation. The first is the rift between the West Bank government and the Hamas-held Gaza strip. As Hamas does not recognize Israel, and refuses to engage in negotiations with it, the viability of a peace accord seems unrealistic to Israelis. Second, the channel does not identify the future character of the Palestinian state – will it be a democracy or a PLO-held autocracy? Third, the Palestinian channel fails to address the issue of government payments to the families of convicted terrorists. For Israelis, such payments are tantamount to an official Palestinian embrace of violence. Finally, the profile does not address how the issue of sovereignty over Jerusalem will be resolved. Addressing these issues may not be the point; however, dialogue, understanding, and trust have to begin somewhere. This Facebook page will not cure all that ails participants in the Peace Process, but it may well be a substantive and auspicious start.

One thought on “How Palestine Digitized It’s Public Diplomacy”