When reviewing the US State Department’s Facebook account, it becomes apparent that the Department is in the midst of two digital campaigns. The first focuses on China’s alleged misconduct during the Covid19 outbreak. The second argues that Iran’s nefarious activities in the region, and the world, must be met by international condemnation and sanctions. In this two-post blog series, I aimed to evaluate whether these Facebook campaigns have been well received by online publics. My analysis focused on an important social media metrics- comments posted by Facebook users. Traditionally, diplomats and ministries of foreign affairs (MFAs) have relied on the metric of ‘Likes’ to evaluate online messaging. Indeed, high numbers of Likes suggest that online publics support diplomatic statements and are willing to express such support publically.

However, there are a myriad of other reasons that may lead a Facebook user to ‘Like’ a post. For instance, a user may like a post due to his profession. US State Department posts often garner Likes from US diplomats or former State Department employees. ‘Likes’ may also may be awarded by journalists and media institutions. Other times, a user may Like a comment following his friends and peers. Users may also ‘Like’ posts ‘Shared’ by their Friends or family members. In such instances, ‘Likes’ are actually awarded to one’s Friend, not the post’s author. Lastly, some individuals Like posts out of irony. All of these suggest that Likes are flawed metrics. Most importantly, Likes do not offer diplomats feedback that can be used to fine-tune online messages, or assess the acceptance of a nation’s foreign policies. Comments, on the other hand, offer such critical feedback and are thus a more valuable social media metric. In this post, I analyzed 8 Iran-related Posts published by the State Department during June on 2020.

The JCOPA and its Legacy

In May of 2018, the US decided to abandon the Iran nuclear accord, also known as the Joint Comprehensive Plan of Action. Arguing that the accord was fundamentally flawed, the US promised to rally it allies and sign a new accord with Iran. America’s withdrawal from the JCPOA was followed by a Facebook campaign that continues to this day which brands Iran as a regional and global security threat given its nuclear ambitions and foreign terrorist activities. Iran has also been portrayed as a consistent human rights violator.

During June of 2020, State Department Facebook posts dealt with 5 issues, the first of which was human rights violations. These two posts, shown below, called on Iran to release a jailed environmental activist and to enact democratic reforms. While 46% of the comments published in response to the environmental post had a negative sentiment, 92% of the comments published in response to the democratization post were negative. Comments stated that the US was hypocritical, for how could Trump’s America call for the release of an environmentalist, while destroying the environment? Users also argued that the US was actually seeking regime change in Iran. As it failed to lead a coup, or plant a friendly leader, the US was now calling for democratic reform. It is important to note that many negative comments were also written by American citizens. 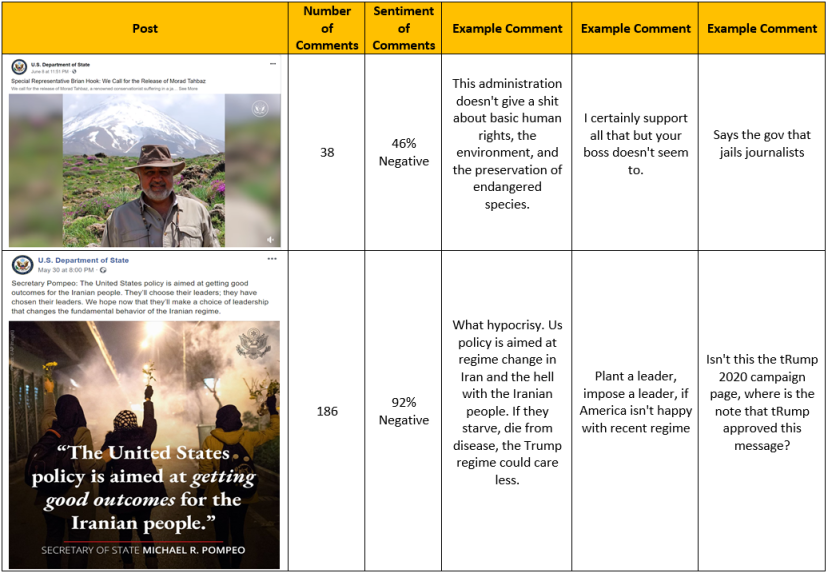 Two State Department posts, shown below, dealt with Iran’s sponsoring of terrorist activities around the world. One post focused on Iranians targeted assassinations, many of which include bombs that kill innocent bystanders. 79% of the comments published in response to this post had a negative sentiment. Several comments labeled the US as hypocritical given that the US assassinated Iranian General Qasem Soleimani earlier this year. Other comments stated that CIA covert assassinations killed more people than Iran while American Facebook users suggested that Trump was using the Iranian issue to distract from the George Floyd protests.

A second post included a map identifying those European nations that had suffered an Iranian terror attack. 81% of the comments had an overtly negative tone with Facebook users lambasting the US for leading coups and regime change in as many countries while killing scores of civilians in the ‘War of Terror’. American users wondered if Saudi Arabia, the US’s regional ally, was not responsible for similar terrorist activities.

Three Facebook posts dealt with Iran’s foreign policy which rests on intimidation and developing nuclear weapons. One post, which stated that the US refuses to play by Iran’s rules, was negatively received with international and American users arguing that US doesn’t abide by its own rules, including freedom of speech and freedom of protest. These comment all focused on the George Floyd protests. A second post, which warned of Iran’s advancement towards a nuclear bomb elicited very negative comments. Facebook users argued that the Iran was making headway towards a bomb as the US abandoned the Iran nuclear accord. Others called out US hypocrisy as America has the world’s largest nuclear arsenal. A final post, stating that the US would work with its allies to prevent an Iranian bomb was greeted with mirth as many users asked- what allies? 77% to 81% of these comments were negative.

Israel played a prominent part in the State Department’s campaign. First, several users stated that the US was targeting Iran due to its alliance with Israel. Other users argued that Israel was the one orchestrating the US’s actions against Iran. Finally, the State Department published a post denouncing Iran’s ‘vile’ anti-Semitic rhetoric, an assertion that promoted Facebook users to attack President Trump’s vile rhetoric. 82% of the comments published in response to this post had a negative sentiment.

This post analyzed part of the State Department’s Facebook campaign against Iran. Given its small sample it cannot offer any definitive conclusions. There are, however, three important insights that can be drawn from the analysis. First, Facebook comments can offer diplomats important insight into their nation’s foreign policies and image. Indeed, Facebook users rejected the State Department’s campaign arguing that the US was hypocritical and the one ultimately responsible for Iran’s current nuclear policies. While some focused on America’s past, and long history of forced regime change, others addressed the present and the Trump’s administration’s unwillingness to negotiate with Iran or abide by the Iran nuclear agreement. Second, domestic issues featured prominently in users’ comments. Many argued that the US cannot not lecture other countries on democratic reforms as long as American police officers can kill and harm black Americans at will. Some compared Iran’s reliance on a secret police to Trump’s order to use military force against ‘Black Lives Matter’ protesters. In this way, domestic occurrences influence online reception of diplomatic messages and diplomats must take note of how domestic issues will impact the reception of online content. Finally, users’ comments offer a glimpse into how America is now viewed by active online publics- America is framed as a negative force in the world. A nation without allies, a conscious and a sense of history. Such comments suggest that if American diplomats are to obtain their online goals, they must re-craft their messaging while focusing on issues that do not conjure the mistakes of the past, or highlight stark contradictions at the domestic and international levels.

One thought on “Crafting Digital Diplomacy Campaigns: How America’s Iranian Campaign is Backfiring  ”