Last week I attempted to explore the world of “follow-mies”, countries that are enemies in the geo-political world yet follow one another on twitter. An interesting finding was that in the age of twiploamcy, the Arab world is a disconnected one. I found that the majority of Arab countries do not follow one another’s official twitter channels and that several prominent Arab countries are completely isolated as they are not followed and do not follow any Arab foreign ministries.

The Social Network of Arab Ministries of Foreign Affairs is presented in the image below. 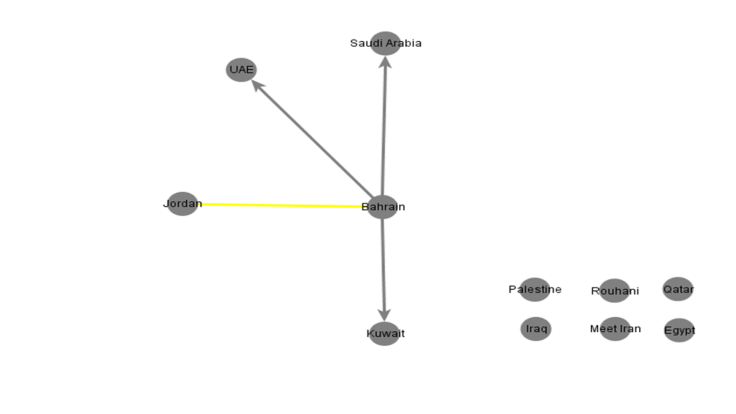 Note: MFAs that follow one another are painted in yellow

As can be seen, digital diplomacy ties exist between only half of the sample (five countries) while the other half are completely isolated. Bahrain is the most active member in the Social Network of Arab MFAs as it follows four other MFAs (Jordan, Kuwait, Saudi Arabia and Bahrain). Bahrain and Jordan are the only two countries in the sample to follow one another.

How Israel Connects the Arab World

Surprisingly, when Israel is added to the social network of Arab MFAs, the Arab world becomes much more connected as can be seen on the image below. 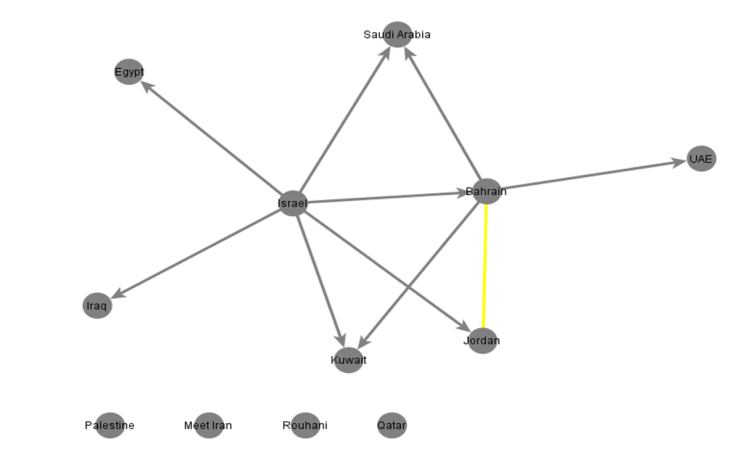 Note: MFAs that follow one another are painted in yellow

Israel follows both Egypt and Iraq thereby linking them to the Social Network of Arab MFAs and ending their isolation. By so doing Israel increases the number of Arab participants in this social network from five to seven. Thus, it is Israel that glues together a disconnected Arab world. However, despite the fact that Israel is the most active follower of Arab MFAs in the region, it is not followed by any other Arab MFA thus preventing it from truly connecting the Arab world.

A Connected Arab World at the UN 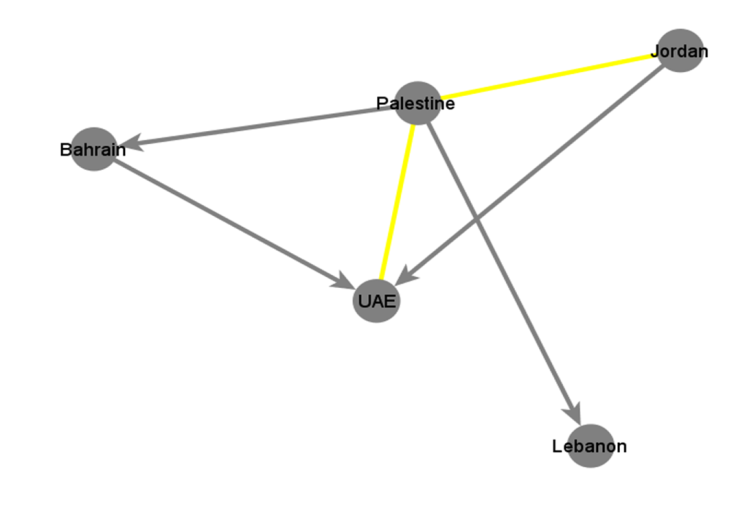 Note: UN missions that follow one another are painted in yellow

Interestingly, while the UAE’s ministry of foreign affairs is followed by just one other ministry, the UAE’s mission to the UN is followed by three other missions making it the most popular mission in this social network (Bahrain, Palestine and Jordan). Finally, Bahrain which is at the core of the Social Network of Arab MFAs is at the periphery of the Social Network of Arab mission to the UN.

The many differences between the two social networks presented in this analysis demand an explanation. One possible explanation could be that the decision to follow another Arab mission to the UN is in the hands of the Ambassador or the embassy’s social media director as opposed to the decision to follow another Arab MFA which is in the hands of politicians. Another possible explanation is that the Arab nations often cooperate with one another on diplomatic efforts in the United Nations and its various organizations. Thus, Arab missions to the UN follow one another in order to coordinate multi-lateral diplomatic efforts.