On the 23rd of July, Donald Trump accepted the Republican nomination for the Presidency of the United States. This week Hillary Clinton is likely to be chosen at the Democratic nominee for the Presidency. While it is true that national elections often draw attention from foreign countries and governments, no election is as closely monitored by the international community as the American one. Indeed, newspapers reporters from all over the world flocked last week to Cleveland to report on the Republican convention while this week they will all migrate to Philadelphia to cover the Democratic convention.

In light of both parties’ conventions, I attempted this week to explore whether the US candidates for the Presidency attract diplomats and diplomatic institutions to their Twitter accounts. Both Clinton and Trump use Twitter on a daily basis in order to make announcements (e.g., selection of their VP), comment on domestic and global events and outline future policies. Such was the case with Trump’s questioning of the role of NATO or Clinton’s announcement that she is not afraid to confront dictators. It would therefore be fair to assume that foreign ministries, UN missions and other diplomatic institutions would follow Clinton and Trump on social media in order to gather and analyze relevant information.

I began my analysis by examining the number of international news outlets and journalists that follow Clinton and Trump. Notably, I used a sample for more than 500 publications that deal with foreign policy and international affairs alongside diplomatic correspondents, diplomatic commentators, foreign affairs journalists and foreign affairs editors. The results of this analysis may be seen below.

Next I analyzed the number of MFAs (foreign ministries) each candidate attracts to his Twitter channel. To do so I compiled a sample of 69 MFAs that actively use Twitter. The sample included MFAs from Europe, N. America, Latin America, the Middle East, Asia and Oceania. The results of this analysis may be seen below.

As can be seen in the graph above, while Clinton is followed by 24 MFAs from the sample, Trump is followed by only 3. While this is a substantial gap, both candidates attract a relatively small number of ministries given that the sample size was 69. It is also possible that Clinton is able to attract more diplomatic MFAs as she previously served as Secretary of State.

My next analysis focused on mission to the UN in New York and Geneva. My assumption was that UN missions would actively follow both US candidates as missions deal with a variety of global issues. For this analysis I used a sample of 33 missions to the UN. The results of the New York and Geneva analyses may be seen below.

While UN mission have a global mandate, NATO missions may find even more interest in Presidential candidates as the US is the leader of this military alliance. I therefore assumed that NATO missions would closely follow both candidates on Twitter. I also expected to find many missions following Trump given his recent statements on the futility of NATO. For this analysis I used a sample of 22 missions to NATO and the NATO press secretary. The results may be seen below.

As can be seen, while Clinton is followed on Twitter by 9 NATO missions, Trump attracts only 1 mission. This is another substantial gap in Clinton’s favor. Moreover, Clinton is followed by nearly half of the sample (9 out of 22 missions). This could suggest that NATO mission more closely monitor US political figures than UN missions or MFAs.

My last analysis examined the number of UN related multi-lateral organizations that follow both candidates. To do so I compiled a sample of 43 organizations including the World Trade Organization, the World Health Organization, and the International Telecommunication Union. The results of this analysis may be seen below. 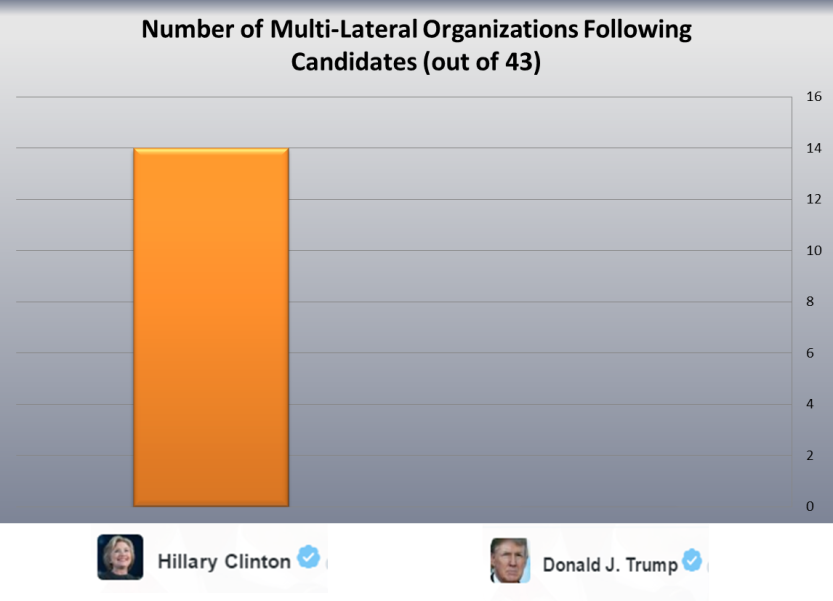 As can be seen, while Clinton is followed by 14 UN related organizations, a third of the sample, Trump is unable to attract any such organizations to his Twitter channel.

In this post I attempted to analyze whether US Presidential candidates attract diplomatic institutions to their Twitter channels. My assumption was that given the US’ role in the world, MFAs, UN mission and NATO missions would flock to Trump and Clinton’s social media accounts given a desire to gather relevant information.

The analysis first revealed that diplomatic correspondents, editor and publications do not follow the candidates in large numbers. This is quite intriguing as one would assume that the identity of the future US President, and his intended policies, would be of interest to this group. One possible explanation is that Presidential candidates are covered by journalists whose focus is the US rather than diplomatic correspondents.

The analysis of MFAs, UN mission, NATO missions and UN related organizations all revealed a large gap in Clinton’s favor. Moreover, as opposed to MFAs, Clinton is able to attract a large number of UN and NATO missions and UN related organizations (one third or one half of the sample). These results could indicate that diplomatic institutions do in-fact follow US candidates for the Presidency.

The large gaps in favor of Clinton found in all analyses may be partly explained by the fact that she was once Secretary of State. While Clinton did not operate her own Twitter channel while she was Secretary, it is possible that some diplomatic organization followed her once she left office as past Secretaries of State are still valuable sources of information for diplomats. It is also possible that diplomatic institutions do not follow Trump given a fear that doing so would legitimize the candidate and his views. As Trump is a divisive candidate, diplomatic organizations may feel that following him on Twitter constitutes a form of endorsement.

2 thoughts on “Do US candidates for the Presidency attract diplomats on Twitter?”