The horrid attack that shook London on Wednesday was a painful reminder that terrorism still plagues our world. Within minutes of the attack confusion and panic spread offline and online as people scrambled to make sense of the events unfolding outside Parliament. Initial reports indicated that several terrorists had attacked various targets across the city. Next, Tweets began to emerge from within Parliament suggesting that a terrorist may have entered the building. Rumours began circulating that a manhunt was underway to apprehend a terrorist who fled the scene. Amid this atmosphere of fear and contradictory information, London Embassies were suddenly tasked with a familiar assignment- offering consular aid to citizens located in London. As has been the case in recent years, serval Embassies turned to social media in order to inform citizens and gather information on citizens requiring aid. In this blog post I evaluate the manner in which London Embassies used Twitter in the hours following the London attack.

News of a possible terror attack first broke at around 3 PM London time. As is usually the case, both news outlets and law enforcement agencies stated that an “incident” of an unknown nature had occurred and that more information would follow.

We are aware of reports of an incident at #Westminster. We will put more information out as soon as we can

Half an hour later, the Metropolitan Police announced the closure of the area surrounding Parliament while the BBC began reporting on causalities.

"One of the police officers told me someone had been shot" – @BBCLauraK reports from Westminster under lock downhttps://t.co/WG8yXWpPVV pic.twitter.com/LlWbBSCagh

Twenty minutes later, at around 4:00 PM London time, the Metropolitan Police confirmed that the unknown “incident” was now treated as a terror attack.

Incident in #Westminster: We are treating this as a terrorist incident until we know otherwise

This was the official signal Embassies were waiting for before going online. Notably, in order to examine how Embassies used digital platforms during the attack I used a sample of 25 London based Embassies. Of these 25 Embassies, only 7 reacted promptly to unfolding events. These included the American, Canadian, Finish, Polish, Russian, Irish and Dutch Embassies.

Below are examples of Tweets published by the Finnish, Swedish and Polish Embassies in their native language.

The American Embassy Tweeted an initial message which followed the template of the Metropolitan Police- acknowledging that an event was underway, assuring followers that the Embassy was monitoring the event and prescribing a desired behaviour.

We are aware of a reported incident near Westminster in London. Please avoid the area and monitor local news/follow @metpoliceuk for updates

Additionally, at around 4 PM London time the US Embassy altered its web page to note that a security alert had been issued in London. 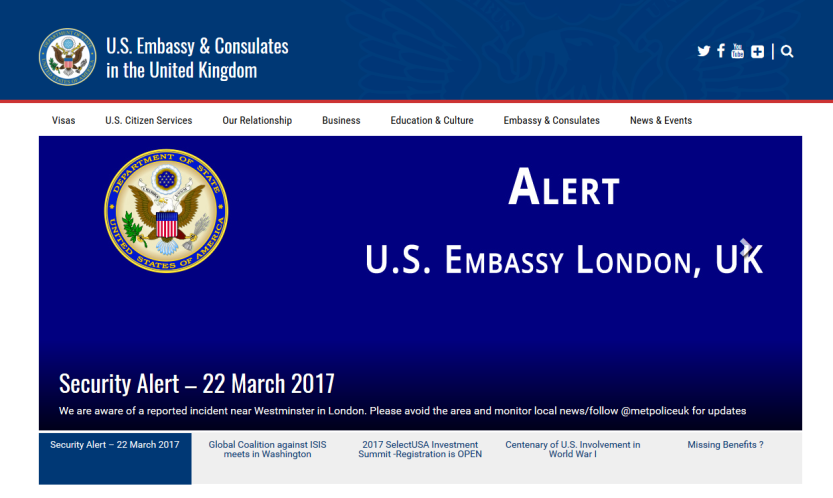 By this time, the US State Department’s travel warning channel was also Tweeting information regarding the London attack.

US citizens in the #UK: https://t.co/uJFyayh3uW

The Canadian High Commission took a different approach by asking its followers to re-tweet its messages. By so doing, the High Commission may have been able to increase the reach of its online content thus effectively delivering information to its citizens.

Please RT There are reports of an incident in Westminster. We strongly advise everyone to avoid the area until it is confirmed safe.

As was the case with the US, the Canadian travel warning channel also Tweeted information about the London attacks.

Finally, the Russian Embassy both acknowledged in Russian that an event was unfolding and re-tweeted information published by the UK branch of Russia Today. Thus, the Embassy may have attempted to brand Russia Today as a credible source of information, one that rivals the BBC.

These Embassies, which I call first responders, quickly leveraged digital platforms to communicate with their citizens despite the confusion that characterizes consular emergencies. However, only 7 of the 25 Embassies I evaluated did so. This could suggests that these Embassies had contingency plans and procedures in place which guided their online activities in the minutes following the terror attack.

By 6 PM London time, the number of Embassies that Tweeted information pertaining to the London attack grew from7 to 14.  One of these late bloomers was The Indian High Commission which published the Tweet below. Note that the Tweet includes emergency contact numbers.

Similarly, the Israeli Embassy tweeted the emergency contact numbers of the Metropolitan Police in both Hebrew and English.

It should be noted that the Tweets published by the Indian High Commission and the Israel Embassy may have never reached their citizens stranded in London. This is because cellular networks tend to collapse after terror attacks. However, these Tweets could have been seen by family members in India and Israel who would then contact the Embassy and report their loved ones as unaccounted for.

The Austrian Embassy and New Zealand High Commission followed the template of the Americans stating that they were in contact with the Metropolitan Police, that they were monitoring the situation and that citizens should follow the Police on Twitter.

We are aware of an incident in the Westminster area of London. Please avoid the area, monitor the news and follow advice from @metpoliceuk

Interestingly, by this time several Embassies were encouraging followers to use the Facebook Safety Check application to inform loved ones that they were safe. These Embassies may have thus been able to more effectively allocate their resources towards making contact with citizens that were unaccounted for. Moreover, such safety checks would have lowered the number of distressed citizens contacting national MFAs and requesting aid in reaching loved ones visiting London.

If you are in #Westminster you can let your friends know you are safe using Facebook's Safety Check https://t.co/oiuL6RiuIH

The Greek Embassy took a different approach by curating information on Twitter and referring followers to Facebook. This may have been a useful approach for two reasons. First, by curating information, and not just re-tweeting the Metropolitan Police, the Greek Embassy may have emerged as a credible source of information. Second, by referring followers to Facebook the Embassy may have been able to gather all social media followers on one platform rather than allocate resources to both Twitter and Facebook.

PARLIAMENT SHOOTING: Latest Updates:
A police officer has been stabbed in the Houses of Parliament in central… https://t.co/WLv3ZgZ0sn

PARLIAMENT SHOOTING: Latest Updates:
A police officer has been stabbed in the Houses of Parliament in central… https://t.co/WLv3ZgZ0sn

In some cases, MFAs and Embassies re-tweeted one another’s messages. Such was the case with the Canadian High Commission in London and Canada’s travel warning Twitter account. This is an important strategy as both accounts probably share few Twitter followers. Thus, by re-tweeting one another both accounts were able to exponentially increase their online reach.

By 6 PM London time, 14 Embassies in London had published information on Twitter including late bloomers such as Australia, Brazil, Argentina and Lithuania. It is possible that such Embassies had a delayed response due to stringent guidelines that prevent Embassies from Tweeting during an emergency without approval from the MFA. Conversely, some Embassies may have been slow to respond due to lack of guidelines. Tweets from late bloomers may be seen below.

Following today's events in Westminster, we urge you to remain vigilant, stay safe & follow the advice of local authorities #@metpoliceuk

Keep following this Twitter feed, https://t.co/AaDPTyx3f5 and Facebook for the latest info on the incident in #Westminster

By 7 PM London time, some four hours after the London attack began, the majority of Embassies in my sample had turned to Twitter. However, there were serval Embassies that did employ digital tools in their consular response including the High Commissions of Kenya and Rwanda and the Embassies of Egypt, Qatar and Bahrain.

Embassies that were the last to go online often settled for Tweeting condemnations of the attacks and promising common resolve in the face of terror. Thus, these Embassies used Twitter for political messaging rather than consular aid. For instance, the Turkish Embassy in London Tweeted two messages by the Turkish foreign minister (see below).

Having suffered similar attacks many times, Turkey and Turkish people share the sorrow of the UK and its people.

These Tweets also follow a familiar template- expressing sorrow, demonstrating shared experiences and promising resolve.  Notice that all these elements are also present in the message Tweeted by the Israeli President.

Our thoughts are with the people of #London. Terror is a threat to us all and we must stand united against it. @IsraelinUK @ukinisrael

Conversely, the Indian foreign minister did not promise resolve against terror in her Tweet. Rather she provided information on her own actions including staying in touch with the Indian High Commission in London. Such Tweets are important as they inform the national citizenry that diplomats are hard at work and that the MFA is following events as they unravel.

I am in constant touch with Indian High Commission in London. There is no Indian casualty reported so far. #LondonAttack @HCI_London

A host of Embassies in my sample also Tweeted condolence messages by their Ambassadors. Such messages are important as they demonstrate the ties that bind nations together and they can strengthen relations with the domestic population. Additionally, messages by Ambassador may resonate with the local diaspora which has an emotional bond with its host country and its country of origin.

Shocked by the terrorist incident in London. Our thoughts are with the families of the police officer and the… https://t.co/jnG9yNbcce

My thoughts are with families of the victims & all Londoners. An attack at the heart of British democracy is an attack on all free peoples.

Terrorists are trying to sow fear and panic. They will not win. #WeAreNotAfraid #London pic.twitter.com/EUGLeXt6Ps

Finally, some Embassies demonstrated common values by sharing images of solidarity. The image below, of the Tel Aviv municipal building baring the colours of the Union Jack, achieves this exact goal.

Wow. Thank you Tel Aviv, a city whose resilience and diversity we celebrate. https://t.co/uKVqzc2D2a

This post evaluated how Embassies utilized digital platforms during the horrid London terror attack. Results suggest that while some Embassies were quick to go online, others were slower and may have failed to deliver aid and much needed information to their citizens. It is possible that an Embassy’s ability to utilize digital platforms during a consular emergency stems from the existence of guilders and procedures. Additionally, some Embassies may have conducted simulations in which such procedures are evaluated and perfected.

This post can offer a set of recommendations for Embassies looking to better their use of digital tools during consular crises.