Some have traced the origins of digital diplomacy to America’s need to counter Al-Qaeda’s online narrative and recruitment efforts. As Ellen Hallams has written, already in 2008 it was estimated that the internet was responsible of 80% of recruitment of Jihadi movements. In an attempt to stem the tide of recruitment, and counter Al-Qaeda’s narrative of holy Jihad against Western Imperialism, the State Department migrated online and began conversing with Muslim netiznes.

Yet nowadays, MFAs, embassies and diplomats are especially keen on attracting journalists, editors, news organizations and media outlets to their digital diplomacy accounts. Some hope to attract journalists as a means of increasing their online reach. A re-tweet from the New York Times could help an Embassy Facebook post go viral. Others hope to influence the coverage they receive. The Russian Embassy in the UK is consistently attempting to challenge the portrayal of Russia in UK newspapers. Other MFAs hope that media outlets will adopt their strategic narratives or national brands. For instance, India is looking to be marketed as the next global innovation hub while the UK Foreign Office aims to promote the “Global Britain” narrative according to which the UK is exiting the EU, not the world at large.

Even individual diplomats hope to attract journalists and media outlets. Ambassadors migrate to Twitter so as to interact with the local press as do press attaches. This is especially true during political crises in which local Embassies attempt to influence the portrayal of events, actors and issues in the local press so as to facilitate the acceptance of their foreign policy.

The question that remains unanswered, however, are MFAs successful in attracting the media?

Last year, Jennifer Cassidy and I attempted to answer this question. To do so, we created a sample of 500 Twitter accounts operated by journalists and media outlets the world over. The sample included major newspapers from all world regions, foreign policy journalists, diplomatic correspondents, editors of newspapers, global affairs magazines (Time, Newsweek, The New Statesman), global news outlets such as CNN and the BBC as well as TV and radio news shows. Next, we evaluated how many journalists and news organization follow MFAs. The results were surprising-the average MFA attracted 6 news channels and journalists.

This week, I decided to expand the analysis in terms of sample size and depth.

My first task was to update the database of 500 Twitter accounts operated by news outlets and journalists as new editors have been appointed and new journalists have risen to prominence. I also decided to include in my sample magazines, websites and newspaper that focus on diplomacy (i.e., Foreign Policy, Le Monde Diplomatique). Thus, my sample grew to 536 Twitter accounts.

In the second stage, I created a sample of MFAs that included at least five ministries from every region in the world (i.e., North America, South America, Middle East, Asia, Western Europe and East Europe). I also included two MFAs from Oceania- New Zealand and Australia. In total, my sample included 84 MFAs.

My analysis shows that in general, MFAs fail to attract journalists, news outlets, editors and global news channels; the average MFA in my sample attracts 7.8 news channels and journalists out of 536.

The table below includes those MFAs that attract the most news outlets and journalists. As can be seen, the US State Department is by far the most followed by journalists. Yet even the State Department only attracts 112 news channels, less than half of the 536 channels used in my analysis. Lagging behind is the UK which attracts 64 journalists followed by Russia and the EU. Interestingly, Israel outperforms many of the G7 states but this may be a result of Israel’s newsworthiness. It is also interesting to note that South Africa, Chile, Poland and Lithuania are among the MFAs that attract the most journalists coming ahead of many G7 countries and regional powers. 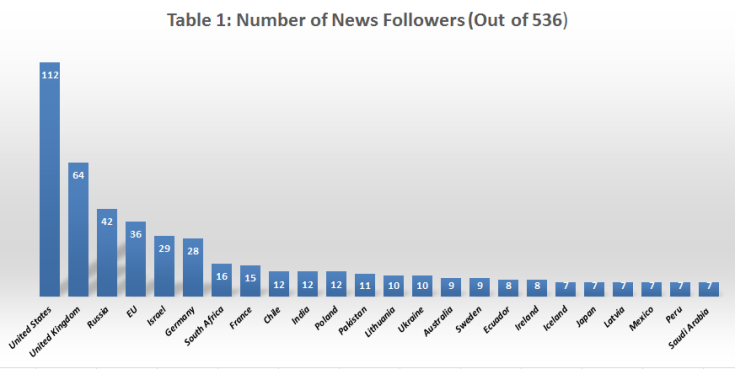 In the next stage of analysis, I compared between world regions. To this end, I calculated the average number of news outlets and journalists that MFAs from one world region attract. The results of this analysis can be seen in the table below. North America attracts the largest number of news channels with an average of 21. However, this is simply because of the State Department. If the US is removed from the analysis, North American MFAs attract an average of only 3 journalists and news channels.

Western Europe comes in at second place attracting an average of 11 news organizations and journalists out of a possible 536. Notably, the Middle East has a higher average than Eastern Europe yet this again may be explained by newsworthiness and not due to higher levels of Twitter activity or better Twitter strategies. The fact that South America outperforms Asia is also interesting given that my sample included the MFAs of India, one of the largest countries in the world, and Japan and South Korea which have risen in news prominence due to North Korea’s missile diplomacy. Lastly, Africa is the world region to attract the least journalists and news channels on average.

Thus far, my results suggest that MFAs have failed to attract one of their most important target audiences.

My final analysis included and in-depth evaluation of every world region. The table below includes the analysis of Western Europe. With the exception of the UK and the EU, most Western European MFAs have a negligible following among news outlets and journalists including global leaders such as Germany, France and Italy.

When looking at Eastern Europe, a similar pattern emerges. Most MFAs attract 5-7 news outlets out of 536 the only exception being the Russian MFA.

The findings of South America are a bit more complex. Most of these MFAs do not Tweet in English which may account of their overall lack of journalistic followers. However, these MFAs did attract all major new outlets from their region. Thus, they lack a global following. 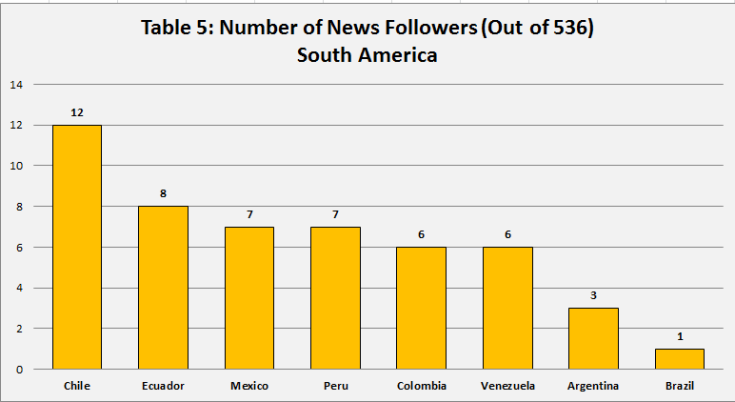 In the Middle East, Israel seems to be far ahead of the curve out-preforming all other MFAs. Here language may be of less importance given that Kuwait, Jordan and Bahrain often Tweet in English. However, the majority of journalists and news channels that follow Israel are American meaning that it too does not have a global reach among news channels.

In Asia, India and Pakistan seem to perform the best with Japan attracting only 7 news channels and South Korea only 6. However, one would expect that the Indian MFA would attract a sizable following given its investments in digital diplomacy and the branding of Modi as the “Social Media Premier”.

Finally, only two MFAs in Africa attract a noteworthy following and they are South Africa and Kenya. But these two MFAs attract the same number of journalists as most MFAs in Western Europe or in Asia. Thus, it seems that yet again, the digital diplomacy gap is narrowing. 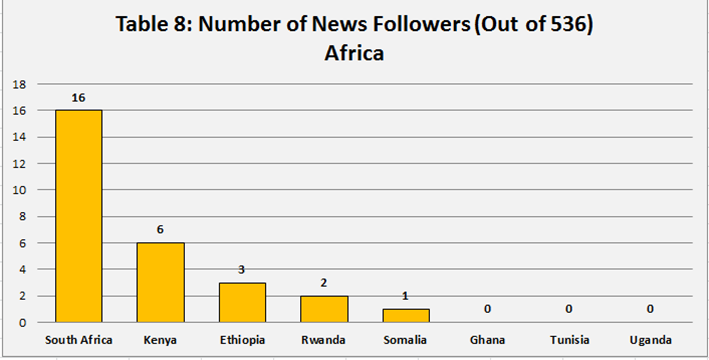 The basic assumption of MFAs is that social media can be used to interact with journalists, influence how news outlets cover and events and impact how journalists portray certain countries. Indeed, the media has always been important to diplomacy and that is even truer today given the diversity of news channels that shape public opinion. However, as this post suggest, most MFAs around the world, including the US, the UK and Russia, fail to attract journalists and news outlets.

This begs two questions: a) why do journalists not follow MFAs? and b) are MFAs communicating with journalists in other ways such as direct message on Twitter, emails or the old network of press attaches and MFA spokesperson? The answers, I’m afraid, will have to wait for another blog post.