The US and LGBT rights

On the 26th of June 2015, the US Supreme Court ruled that the country’s constitution guarantees the right to same-sex marriage thereby legalizing gay marriage across the United States. The ruling, seen as a major achievement for LGBT activist around the world, had both domestic and global implications. In recent years, the promotion LGBT rights’ has been a cornerstones of US foreign policy. As Shoaela Amiri demonstrates in her post on the USC CPD blog, under President Obama the US State Department has been directed to combat the criminalization of same-sex relations in foreign countries, to protect LGBT refugees, to engage international organizations in the struggle against LGBT discrimination and to reply swiftly to the abuse of LGBT individuals abroad.

The promotion of LGBT rights has also been evident in US public diplomacy activities ranging from round table panels and national dialogue days to advocacy campaigns aimed at raising awareness to LGBT rights and the promotion of the LGBT agenda in multi-lateral organizations such as the OECD. Recently the US State Department has even appointed a special global envoy to the issue of LGBT rights.

Given the US’s global promotion of the LGBT agenda it is not surprising that the US Supreme Court’s ruling was followed by a global digital diplomacy blitz in which US officials, governmental agencies and embassies celebrated the new legal standing of US LGBTs.

The social media blitz began when the White House, the First Lady and the State Department altered their profile image on twitter, Facebook and YouTube so that it featured the rainbow colors of the LGBT movement.

While President Obama’s tweet regarding the Supreme Court’s ruling was re-tweeted by 220 thousand followers, and favorited by another 150 thousand, the White House’s decision to adorn the rainbow colors reached millions of social media users through global news sites such as BBC, CNN and Yahoo news.

Next, US ambassadors took to social media to spread word of the Supreme Court’s ruling including Ambassadors to Israel, UK, France and the UN.

Marching with an awful lot of pride with the team @USAinUK today. #LoveWins #Pride2015 pic.twitter.com/abnMXFvTCf

Finally, US embassies across Europe and Asia tweeted on the importance of the Supreme Court’s ruling to the struggle for LGBT rights everywhere.

All people deserve to live free from fear, violence, and discrimination, regardless of who they are or whom they love.” –@POTUS #DublinPride

Why Launch the Blitz?

An important question is why did the US launch a global digital diplomacy blitz featuring the new legal status of US LGBTs? The answer may lie in the importance of morality to international diplomacy. Morality enables nations to achieve their foreign policy goals. Countries that are perceived to be immoral may have difficulty in exercising both hard and soft power as their proposed resolutions in international forums are likely to be opposed while their right to exercise military force may be challenged.

During the first decade of the new millennium, America saw a tectonic shift in its moral standing. Following the invasion of Iraq, the detention and suspected torture of prisoners in Guantanamo bay, the global war on terror and its refusal to join the Kyoto protocol, the US was seen as a morally questionable world power dedicated to promoting its own interests at the expense of others while relying solely on military force to achieve its foreign policy goals.

Since taking office in 2008, the Obama administration has promoted policies that may enable the US to regain its standing as the world’s moral compass. The promotion of LGBT rights a prime example of such policies as it attracts global attention from activists, NGOs and media outlets, it has a moral dimension and it is currently debated in the global public sphere. The US Supreme Court’s recognition of LGBT’s right to marriage therefore  complements America’s new selfie- that of a conscientious world power.

The US is Not Alone

The US is not the only nation attempting to regain its moral standing through the promotion of LGBT rights. Israel is another example of a country that uses the LGBT agenda in order to reshape its image. Given its association with human rights violations and armed military conflicts, Israel has spent considerable resources on branding itself as an LGBT haven. This has included campaigns aimed at attracting LGBT tourists to Israel, media campaigns highlighting gay culture in Tel Aviv and social media campaigns featuring Israel’s annual gay pride parade.

The promotion of LGBT rights as part of one’s global Selfie has even been adopted by the Israeli Defense Forces who uploaded an image of two male soldiers walking hand in hand to its Facebook profile. 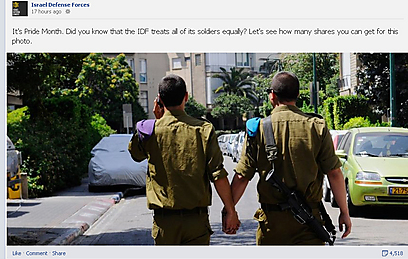 The question that remains unanswered, however, is are digital diplomacy campaigns featuring one’s morality capable of altering a nation’s image among foreign publics? The US’s recent blitz may be an important case study in the attempt to answer this fundamental question.