On January 23, 2017, the Polish Embassy in the US published a YouTube video titled “Words Matter”. The video aims to ensure that journalists and social media users employ the correct term when referring to concentration camps built by Nazi Germany on Polish soil during World War 2. This video serves as a fascinating example of Selfie Diplomacy which is the use of social media to narrate a nation’s image, character, history and role in the world. In this post, I attempt to analyse the Polish embassy’s video and by so doing to analyse its Selfie diplomacy.

This video begins with the caption “Truth about German Nazi Camps”. This caption may be regarded as an intentional reference to the 2016 Oxford Dictionary word of the year- Post Truth. As such, the caption infers that this video will offer its viewers that which is now regarded as a rare commodity- the truth. By evoking a reference to Post-Truth, the Polish embassy is able to portray itself as a source of facts and historical accuracy rather than a disseminator of propaganda or fake news. The caption “Truth about German Nazi Camps” is therefore a rhetorical device that lends legitimacy to the Polish embassy and, by extension, to its claims about history.

The second part of the video includes the caption “Words Matter”. This again is a reference to the phenomenon of fake news and “alternative facts”. However, the second part of the video also includes a visual element- the drawing of the entrance to the most infamous Nazi concentration camp, Auschwitz. It is this drawing that suggests to the viewer that he has yet to be exposed to the truth about  Nazi death camps. Indeed the truth matters, but it has yet to be applied to Nazi camps in Poland. This argument is furthered by the narration

“Words Matter, we hear this all the time. So why does the same not apply when discussing German World War 2 concentration camps”.

As the video suggests, in order to learn the truth about the Camps the viewer must return to the beginning of World War 2 and the Nazi invasion of Poland. While discussing the German invasion of Poland, the video moves from drawing to photography as is evident by the photograph of a burnt building. The transition from drawing to photography is meant to lend further credence to the Polish embassy’s claims about the past given that photographs are seen as accurate historical records.

Image 1: From Drawing to Photography

Notably, the narration of this section brings to the foreground another Polish argument- that Poland was also a victim of Nazi Germany; that it too suffered from the brutal violence of the Nazi regime. This argument is furthered by the narration “Poland alone lost 6 million ciztines, including 3 million Jews” as it implies that the Jews who died in concentration camps were not just any Jews but Polish citizens. This section is meant to counter a popular historical narrative which depicts Poland as “Hitler’s willing accomplice”. Thus, this video not only promotes a Polish narrative but also negates other narratives spread about Poland.

The transition between drawings and images occurs yet again when the systematic annihilation of the Jews is mentioned. This transition is meant to negate another historical narrative of Poland as a nation that has not come to terms with its past. It is the image of Jews in concertation camps that makes the claim that Poland does not shun away from its past, rather it deals with it through facts and historical accuracy.

Image 2: From Drawing to Photography

It should be mentioned that the image of Holocaust survivors used in this video is that of Jewish children. The use of children may imply an attempt to evoke an emotional response that will make the viewer more receptive to the embassy’s message.

Next, the viewer is exposed to a map of Poland which includes the location of Nazi concentration camps while the caption reads “Occupied Polish Territories”. The use of maps is another visual tool that lends credence to the Polish embassy’s arguments as maps are also historical artifacts that are seen as trustworthy. Thus, the viewer is led to trust the Polish embassy’s’ depiction of Poland as occupied territory. 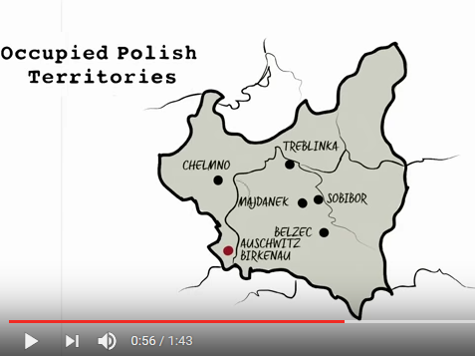 Finally, after making a claim to the truth, and proving its trustworthiness, the Polish embassy presents its main argument: that journalists routinely misuse the term Polish Camps instead of German Camps on Polish Soil.

On the one hand this is a legitimate claim. Journalists and media outlets shape the way news consumers view and understand the world. As such, their misuse of the term Polish Camps promotes a negative and false view of Poland and its past.

On the other hand, the depiction of journalists as untrustworthy echoes attacks on the media now heard around the globe. From the US, to Turkey and Hungary, the media and its institutions are depicted as a threat given their systematic bias. It is thus possible that this video, intentionally or unintentionally, further weakens the press and its role in society as the watchdog of democracy. The attack on the media is most evident when taking into account the narration “Using misleading language obscures the tragedy of millions of Holocaust victims”. This narrations suggests that journalists not only mis-represent the truth but that they also add further injury to Holocaust survivors. The media and journalists are thus de-legitimized in this video on moral grounds.

The video ends with an image and a narration that encapsulates its entire argument. The narration is “It’s not just semantics, it’s a matter of historical integrity an accuracy”, while the image is that of the Ghetto wall, an image which depicts the manner in which Nazi Germany divided Poland and sent 3 million of its citizens to their deaths. Thus, Poland is the victim, not the oppressor.

The importance of the past

The video published by the Polish embassy to the US is but one example of a global campaign managed by the Polish MFA which aims to tell the truth about World War 2 death camps. This campaign includes a twitter channel called “Truth about the Camps” which publicizes instances in which newspapers and media outlets used the term Polish Death Camps. In addition, the channel publicizes instances in which media outlets printed corrections after being contacted by local embassies.

Notably, the Truth About the Camps twitter channel often publishes information in Polish such as instances in which local embassies waged battle against local newspapers and won. It is the use of Polish which suggests that the Polish MFA’s campaign is both a tool for public diplomacy and domestic diplomacy. Foreign audiences are meant to adopt Poland’s historic narrative while domestic audiences are meant to view the MFA as an important national actor which is moulding the world’s view of Poland.

Some may wonder why the Polish MFA is busy with shaping its country’s history and not it’s present. Indeed Selfie Diplomacy often refers to the use of social media to craft a nation’s contemporary image. Yet in a time when images rule supreme, a nation’s past may be as important as its present. Moreover, the past is often used as a prism to understand the present. For instance, by removing the Holocaust’s moral blemish from its past Poland is able to increase its legitimacy and moral standing in the present.