The Arab World has always had a strenuous relationship with social media. On the one hand, several countries in the Arab World monitor their citizen’s social media activity, ban social media or shut down social media during times of domestic upheaval. Such was the case when the Mubarak regime attempted to block Facebook at the height of the Tahrir protests. On the other hand, social media has played an important role in democratization processes in Arab countries and has enabled Arab activists to promote their causes among a global public sphere. Notably, social media have also been used by Arab Diasporas to exert diplomatic pressure on their home country. As Philip Seib has written, Egyptian and Iranian Diasporas disseminated much of the information originating from Tahrir square and the Iranian Green protests.

Despite Arab leaders’ tendency to block social media, a growing number of leaders have opened social media accounts on platforms such as Facebook and Twitter. These now include Egyptian President Sisi, The Jordanian Royal Court, the King of Saudi Arabia and the Ruler of Dubai. The Arab leader with the largest number of Twitter followers is the Jordanian Queen, Rania Al Abdullah, who is followed by more than 8.5 million Twitter users. Unlike her male counterparts, the Queen’s Twitter account does not focus primarily on matters of state, photo-ops with world dignitaries or images of the Queen with military forces. Rather, the Queen’s Selfie seems to be focused on her commitment to social issues, global leadership and multi-culturalism. This blog post explores the themes comprising Queen Rania’s Selfie and argues that this Selfie is in contrast to the persona of 20th century Arab leaders.

In order to characterize Queen Rania’s Selfie I analysed 100 Tweets published on her account between April and October of 2017. Next, I categorised all Tweets into subject matter categories so as to identify possible recurring themes. My analysis found that Queen Rania’s Selfie is comprised of five themes the first of which is women’s empowerment. Throughout 2017, Queen Rania’s account included images of her supporting womens’ initiatives in Jordan or visiting with womens’ groups throughout the country. Two Tweets exemplifying this theme may be seen below.

Happy to be among the families of Bayoudha today, who have launched several income-generating projects by investing in the area’s resources pic.twitter.com/4vqufJPfu0

The second theme comprising the Queen’s Selfie is her advocacy work promoting education in Jordan. During 2017, the Queen met with Jordanian teachers, visited Jordanian classrooms, spoke of the need to integrate technology and engineering into school curriculums and spoke of the need to settle differences through creativity and dialogue. It should be mentioned that education advocacy was the most prominent theme of Queen Rania’s Selfie. Some of the Tweets comprising this theme can be see below.

Every day, teachers take their place at the front of the class to inspire and instill a love of learning in our children #WorldTeachersDay pic.twitter.com/vO3qtxtjAV

Congratulations to the top Tawjihi students His Majesty @KingAbdullahII and I met with today pic.twitter.com/3jCQwyzxBA

Happy to have visited @Eureka_Academy and met with its teachers and students who are keen on learning more about engineering and technology! pic.twitter.com/XwPVyJgAJN

The third theme comprising the Queen’s Selfie was that of Global Leadership. Tweets comprising this theme focused mainly on the Queens support of refugees and her advocacy for education throughout the Middle East. For instance, on the 23rd of October the Queen visited Rohingya refugees and urged the world to take action to halt the persecution of Muslim minorities. Additionally, the Queen presented Prime Minister Justin Trudeau with the Global Citizen Award praising his work for Syrian refugees. Lastly, Queen Rania attended the 2017 Google Zeitgeist event and spoke about the education crisis in the region. These Tweets position the Queen on the world stage while identifying the key values of her Selfie- education and aid to refugees and minority groups. Some of the Tweets comprising this theme may be seen below.

The suffering I have seen and the stories I have heard from #Rohingya #refugees at Kutupalong Camp are harrowing and heartbreaking pic.twitter.com/8j4OVTUVCw

13 mil. children in the MENA region are out of school. A whole generation's future is hanging in the balance-at this year’s Google Zeitgeist pic.twitter.com/bHhzIaUpBO

The fourth component of the Queen’s Selfie focused on the issue of multi-culturalism. Tweets comprising this theme can be separated into two categories- celebrating Jordanian multi-culturalism and advocating for multi-culturalism around the world. The latter is especially interesting as it enables the Queen to engage in a global discussion which far exceeds the borders of Jordan. The Queen’s position on the matter is quite evident given her statement that “It’s sad, that in many part of the world, the word different is becoming synonymous with dangerous”. Some of the Tweets identified in this theme are presented below.

So many people have contributed to making @AmmanDesignWeek an unmissable annual cultural event. Thank you all for your efforts! #ADW2017 pic.twitter.com/dDbUbFroBF

It’s sad that, in many parts of the world, the word different is becoming synonymous with dangerous. @TheSTMagazine https://t.co/2OFlpyPCyz pic.twitter.com/NdzXmw98TV

The final theme identified in my analysis was that of Tech Savviness. These Tweets demonstrate the extent to which the Queen’s Selfie is that of an approachable world leader. Queen Rania is not depicted as hiding within the confines of her palace or office but as a leader who walks among her people, enjoys the same activities and family life as her people and who is as social media savvy as her people.  Especially noteworthy is the Queen’s use of GIFs and photo-bombing her children.

Loved touring Dana Village in Tafileh earlier today, as part of the Jordan Trail Association’s Thru Hike – Best of luck to all involved! pic.twitter.com/HYBWjWC4J7

Tweets comprising this theme offer a “behind the scenes” look at the life a leader while creating the image of an approachable monarch who enjoys the occasional gaff like any of her people. But even more importantly they create a clear dichotomy between Rania’s openness and the rigidity of her male counterparts who often limit themselves to official photos of military exercises. A typical video of a male Arab leader can be seen below.

For much of the 20th century, the public persona of Arab leaders was carefully choreographed. Images of Arab leaders tended to include recurring themes such as profile pictures opposite the national flag, visits to military units, greeting the general public in military uniforms or meeting with other leaders in official settings. A collection of these can be seen below.

Some Arab Leaders still maintain a similar persona. Consider for instance all the images below of Bashar Assad. 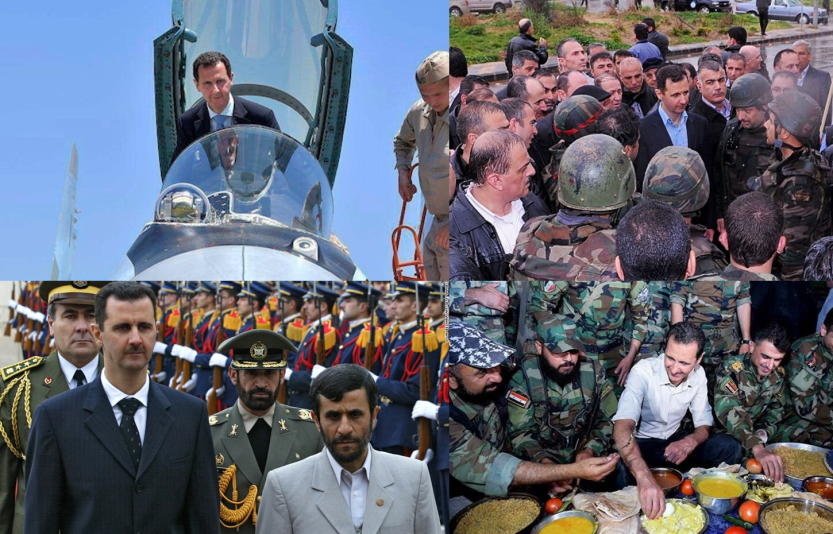 Queen Rania’s Selfie stands in stark contradiction to this 20th century depiction of Arab leadership. Her Selfie, or persona, is that of an approachable leader who is committed to social rather than security issues and who is recognized around the world for her commitment. This Selfie of openness and engagement, alongside her willingness to embrace social media culture (i.e., photo-bombs), may explain why she is the most followed Arab leader on Twitter, surpassing all her male counterparts.