While three weeks are a relatively short period in the physical world, they are as long as decades in the digital one. By the end of the three weeks I had collected some 492 Facebook posts and 1,330 tweets. I soon found that Digital Diplomacy channels are used by countries in order to portray a certain image of themselves. Such self-presentations of nation states has often been referred to by scholars as Nation Branding.

Yet after reviewing hundreds of tweets and Facebook posts I felt that the word Selfie better describes the manner in which nations present themselves on Digital Diplomacy channels such as twitter and Facebook. After all, while Nation Branding can take many forms, the Selfie is a unique phenomenon of the digital age, or  more precisely, the Social Networking age.

The word Selfie, which was added to the Oxford dictionary in 2013, is actually defined as “A photograph that one has taken of oneself, typically one taken with a smartphone or webcam and uploaded to a social media website”. So the Selfie is a modern day self-portrait, one that is meant to be immediately uploaded to a social network profile and shared with one’s many followers. Research has shown that Selfies have become an important tool for impression management, to use the term coined by Erving Goffman. It is therefore a 21st century tool for the presentation of the self in everyday life, in this case the self being a nation state.

1. The US a a fair broker in the mid-east peace process: While the peace negotiations between Israel and Palestine have recently reached an impasse, during the study’s three week period (1/12-22/12/2013) these negotiations were in full swing and US Secretary of State John Kerry frequently visited the region holding meeting with Israeli and Palestinian officials. Interestingly, whenever a picture of a meeting between Secretary Kerry and one side was uploaded to a US Digital Diplomacy channel, another picture of him meeting the other side was immediately posted as well.

Likewise, whenever one side was mentioned in the State Department’s twitter channel, the other side was soon mentioned as well.

Altogether the peace talks proved to be a  prominent topic on the State Department’s digital channels and comprised a substantial portion of the total tweets and posts published during the study’s duration. There was no instance in which Israel or Palestine was mentioned on its own. This finding could indicate that the US goes to great lengths to present itself as a fair and impartial moderator in the Israeli-Palestinian conflict, one which is committed to brokering a peace treaty that meets the needs of both sides.

2. The U.S. goes soft on power: I do not use the term Soft Power as defined by Joseph Nye but rather as a means to emphasize the fact that the United States’ armed forces were barely visible on the State Department’s Digital Diplomacy channels. Whenever the US Army was mentioned it was in a “human interest” frame. For instance, one mention of the US military in a Facebook post was with regard to the use of dogs in Iraq.

This finding is fascinating given the fact that US troops are still deployed in both Iraq and Afghanistan and that during the month of December ten US soldiers lost their lives overseas. Yet since we are dealing with a Selfie, it is possible that the US would rather present itself as the global promoter of democracy and not as a military superpower.

3. The World’s Social Worker: A large proportion of the tweets and posts published on the State Department’s Digital Diplomacy channels dealt with US foreign aid programs. Be it in Asia, Africa or Europe, the US State Department often highlighted the aid it offers to underdeveloped countries (Kenya), disaster stricken areas (the Philippines) and even European countries in political turmoil (Ukraine). 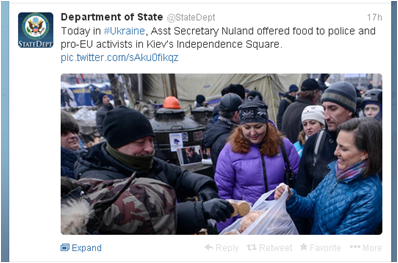 It is this final theme that epitomizes America’s Selfie- The US presents itself as the world’s social worker and not as the world’s policeman and as such it is also a fair broker in global conflicts and a country that shuns away from the use  of force.

One thought on “America’s Selfie: How the United States portrays itself on its Digital Diplomacy channels”