Traditionally, diplomacy rested on proximity. Ambassadors to foreign nations resided in court so that they could assess the temperament of a monarch, create alliances with noble families, gather gossip from local scoundrels and coordinate action with their peers. Proximity has remained important in the 21st century. Ambassadors to multi-lateral organizations essentially reside in a new court where they interact with one another on a weekly basis. These interactions facilitate relationships and, in their wake, collaborative diplomatic action.

Yet digitalization has inverted the traditional relationship between diplomacy and space. Many digital diplomacy initiatives entail a form of diplomacy at-a-distance. This is especially true of virtual embassies. Such is the case with virtual embassy Iran in which State Department staffers in Washington transcend space and interact directly with Iranian internet users. Similarly, Israel recently re-launched a virtual embassy to the Gulf aimed at facilitating direct interactions with Israeli diplomats.

To date, most virtual embassies have failed to deliver on their promise. Virtual Embassy Iran, operated by the State Department, has essentially become a one-way messaging board while the goal of interacting with Iranians has been neglected. Sweden closed down its virtual embassy to Second Life several years ago while Israel’s original virtual embassy to the Gulf turned dormant within a few months.

An important question is why do virtual embassies fail so often? One answer may lie in the relationship between space and diplomacy. Diplomats excel and interacting with audiences and their peers while cultivating personal relationships. These, however, necessitate proximity. As the distance between diplomats and their intended audiences grows, as is the case with virtual embassies, their ability to foster relationships is diminished.

Another answer may lie in the concept of trust.

In recent weeks, Jason Greenblatt (Trump’s special representative to negotiations) has been using Twitter to practice diplomacy at-a-distance. As part of his attempts to mediate talks between Israel and Palestine, Greenblatt has used Twitter to interact directly with Palestinian officials and urge them to return to the negotiating table. This form of diplomacy at-a-distance may have been forced on Greenblatt given the Palestinian government’s decision to effectively boycott the Trump administration, which it views as overtly pro-Israel.

Greenblatt’s diplomacy at-a-distance consists of three practices. The first is openly calling on Palestinian officials to engage with the Trump administration and help facilitate talks with Israel. Such is the case with the interaction below in which Greenblatt responds to a Tweet published by Hanan Ashrawi, a member of the PLO executive committee and veteran politician.

The second practice includes directly refuting arguments made by Palestinian officials regarding the Trump administration’s anti-Palestinian policies.  In the example below, Greenblatt explains why the US cut its aid to Palestine while attempting to frame the Palestinian leadership as an obstacle to peace. 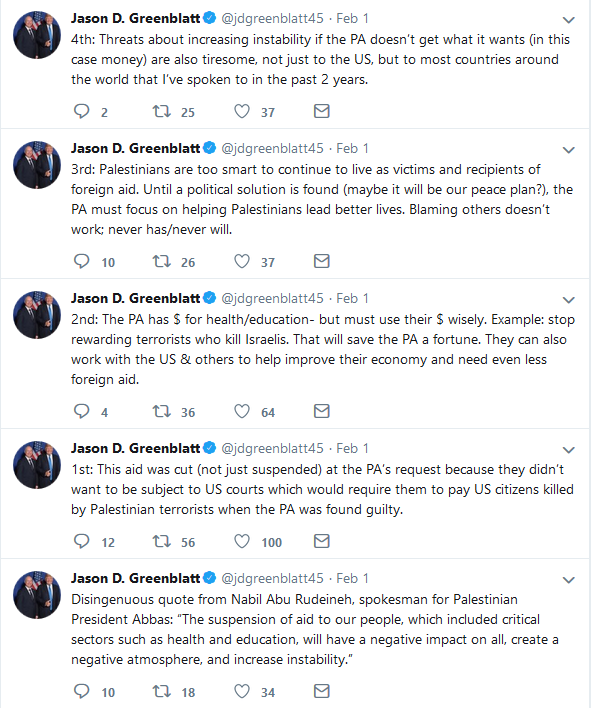 The third and final practice includes highlighting the futility of Palestinian policies and urging Palestinian leaders to adopt new ones. In the tweet below, Greenblatt comments on an op-ed written by Saeb Erekat, a veteran Palestinian negotiator, who alleged that the US tried to “sell out” Palestine during the recent Warsaw Conference on Iran.

Greenblatt’s diplomacy at-a-distance is also diplomacy on-a-stage. He uses Twitter to publically reject and counter Palestinian statements thus bringing media attention to these statements and to his responses. Moreover, by publically challenging Palestinian officials he forces them to respond thus increasing diplomatic pressure on them. Finally, he portrays the Trump administration as open to direct talks with Palestine.

Yet this form of diplomacy at-a-distance has very little chance of actually bringing Palestine back to the table. For that to happen trust must be re-established between the Palestinian government and the Trump administration. Such trust can only be built through proximity, through private conversations in closed rooms. Digital diplomacy can help sustain trust and deepen trust. But it cannot build it on its own.